Colorradio.com - The Tune Weavers
Must Have Javascript on
For The Slideshow To Work 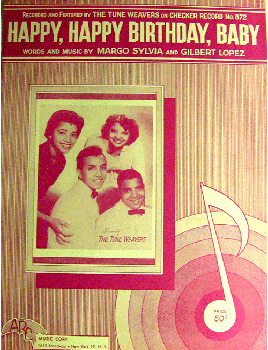 From the Boston area (Woburn), the Tune Weavers were Margo Sylvia-lead, Gilbert Lopez-tenor, Charlotte Davis, and Johnny Sylvia-bass. John was Margo's brother and Charlotte was a family member. They were supposedly called the Tone Weavers, and then mistakenly pronounced by a local DJ as the Tune Weavers and it stuck with them. It would explain a few of the inconsistencies shown below with their first record. It was issued on Frank Paul's Casa Grande records, and was a huge local hit. It took quite some time to become a hit, but once Dick Clark played it on Bandstand, it's popularity shot through the roof. A distribution deal with chess/Checker was struck to keep up with the demand for product. The disc rose to number five on the Billboard pop charts, and spent a total of nineteen weeks on those charts. The Tune Weavers had many follow up records, trying to recapture the success they had with "Happy Happy Birthday Baby", but they never did. Some great records were issued on Checker and Casa Grande, and pictures of them are below. A legitimate LP issued by Frank Paul in 1973 was released, which captured their output and a couple of unreleased songs. Margo Sylvia recorded a couple of records for Classic Artists in 1988 and she still had that great distinguished voice. Perhaps they were a one hit wonder as far as the charts might show, but they were a very talented group that sounded unique - and amazing. 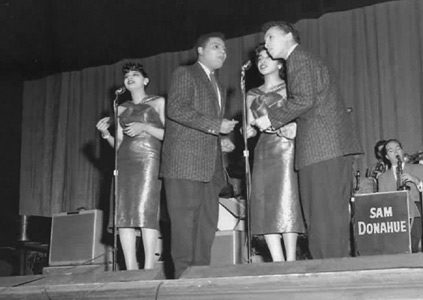 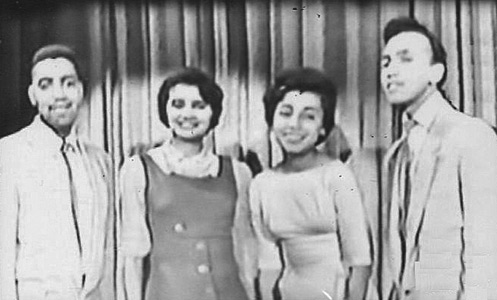 This is the first label,Casa Grande #4037, that the Tune Weavers biggest hit "Happy Happy Birthday Baby" came out on originally. Shown is the fairly scarce promo version. D.J. Copy is shown just above the right side of the title.

This is the regular stock issue of Casa Grande #4037. The flip side, "Ol' Man River" is a great two sider, both are excellent songs worthy of a listen. This was released in 1957.

Here's the "Happy Happy Birthday Baby" side (872) on 78 that was soon picked up by Checker records and distributed nationally. The stamped matrix number is 4037B indicating it may have been intended for the "B" side of the record. On the flip is "Ol Man River." As you will soon see, it wasn't the only flip side paired with "Happy Happy Birthday Baby!" The matrix number is 4037 "A" indicating possibly the intended side for radio play.

Here is the original 45 on Checker, with the original flip side of "Ol Man River." Label information is the same as the 78.

The Canadian 78 release on Quality records. The flip side of the Quality label 78 bears the "Ol Man River" side. Notice the reference of "872A", to the Checker release. My guess is that the next flip, "Yo Yo Walk" was never issued on the Canadian Quality 78 or 45.

The Quality 45 RPM. It has the same information as the 78. Oddly, there is no reference to Casa Grande or Checker on the label, as was often the case on Canadian labels.

Shown above is the 45 RPM issue. The dead wax number is Chess 8062 indicating an earlier recording than "Ol' Man  River" . Which Record pairing was released first (Yo Yo Walk or Ol' Man River)is somewhat  unclear based on dead wax  numbers,  but it is confirmed that  Ol' Man River was the first because  it appeared on the Casa Grande release.

This is the second pressing of the big hit. This label had the vertical checker on the left side, and was used through 1963. The Flip side of the second press was "Yo Yo Walk." It's My guess is that "Ol Man River" was never issued on this style of the Checker label.

Here is another variation of the second press. The writing is bigger on the titles, but the information stays the same. I would consider this as a second press of the vertical Checker label.

Here is a less common 78 with the vertical Checker logo. Being a good consistent seller, it makes sense that there was still a demand for the record, so Checker pressed these for consumers and jukeboxes. In general, Checker continued to press 78's up to at least #947 which is a Bobby Saxton disc - pressed in either late 1959 or early 1960.

Likely a mid 60's press, it's apparent that the record continued to sell, and Chess/Checker continued to press the platters to fill the demand. Like the late 78 shown prior to this, they kept with "Yo Yo Walk" on the flip.

As in the previous picture shown, the left vertical logo label design. Checker records number 877 introduced the Checker logo vertically on the left, instead of the "web" design shown earlier. This is the promo copy number 880 and "Ol Man River" is probably the "A" side based on the matrix #. There's an instrumental on the "B" side by Paul Gayten called "Tough Enough", which mentions "His Small Tone Weavers. 1KD is a portion of the numbers in the dead wax.

Here is another version of the same record. The running time has been corrected? to 1:45 on the Tough Enough side, but both records play the same. The ZTSC 9610 has been removed, and now the group is called "Just" the Tone Weavers. I suspect there may not have been a promo version of this label. How many times can you admit to errors?

The promotional version of the last vintage Tune Weavers release is shown, and called , " Congratulations On Your Wedding." This was issued in 1962. The "B" side "Your Skies Of Blue", is on the original Checker label vertical logo design. The design continued through 1963. Notice that nowhere on the label is "promotional copy" or "Not For Sale" shown. 1962

This is Checker record's second attempt to label their Promotional record as, well, Promotional! The basic information is the same, but the lettering size has changed.

Here is the stock copy of the Tune Weavers singing "Congratulations On Your Wedding." Margo and Husband John have writers credits. The flip side, "Your Skies Of Blue." Checker was a subsidiary of Chess records ,and had a huge network of promotion available. This did not do as well for the Tune Weavers. This copy really looks more like the first promotional copy.

Going back to the Casa Grande releases, and here's something you won't see too often. I always figured Casa Grande 78's were produced, but you just don't run across them everyday. I believe the original 45 issue of "I Remember Dear" and "Pamela Jean" was the most common for the label, but 78's of any of the Casa Grande titles were very limited in production.

This is the 45 RPM follow-up to "Happy Happy Birthday Baby." "I Remember Dear", was issued in 1957. It's a nice ballad, but it didn't catch on, but it was a great up tempo side. "Pamela Jean" is on the flip with Margo Silvia and her distinctive lead vocals. It is a very unique record.

This was the fourth out of five releases for Casa Grande. "Little Boy" was parked on the "A" side. "Look Down That Lonesome Road" was used as the flip side Notice the odd numbering scheme, issue 101, and the new label design.

Here is a variation of Casa Grande 101. The label lettering is larger and the address is gone from the top.

The last Casa Grande release for the Tune Weavers was "My Congratulations Baby." It was similar to Happy Happy Birthday baby, but did not catch on. The up tempo flip is "This Can't Be Love" Released in 1960, in spite of what the release number might indicate sequentially. Casa Grande went back to the silver and black label design for this one. 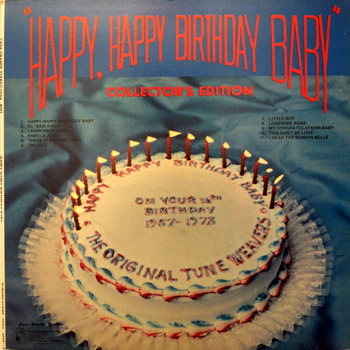 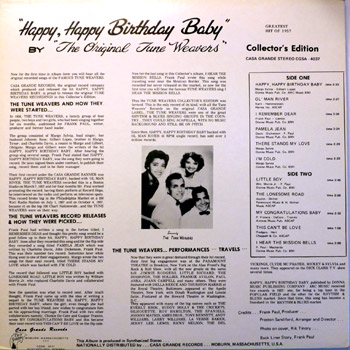 The only "original" Tune Weavers album of material that was a legitimate issue from Frank Paul in 1973. It included most of their songs recorded to that point. It was issued on the Casa Grande record label shown out of Boston. I Found this at the infamous Mill Valley, CA. record shop, that closed for good in late 2007.

In the late 1980's, Classic Artists recordings had the hindsight to record many great doo wop and rock and roll acts that were popular in the 1950's and 60's. These were all newly recorded songs. Some were new compositions, and others were remakes of old standards. This is the first of two records recorded by the Tune Weavers."Come Back To Me" and "I've Tried" were issued in 1988.

In the late 1980's, Classic Artists recordings had the hindsight to record many great doo wop and rock and roll acts that were popular in the 1950's and 60's. These were all newly recorded songs. Some were new compositions, and others were remakes of old standards. This is the first of two records recorded by the Tune Weavers."Come Back To Me" and "I've Tried" were issued in 1988.

This is the second and final release on the Classic Artists label for the Tune Weavers. These are two seasonal tunes "Merry Merry Christmas Baby" and "What Are You Doing New Years Eve." Both are recorded in stereo and feature the distinctive lead of Margo Sylvia.