Colorradio.com - Jimmy Charles
Must Have Javascript on
For The Slideshow To Work 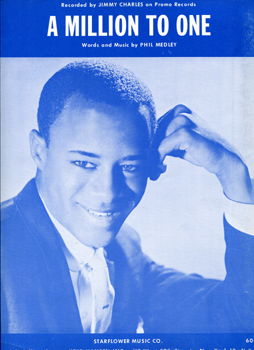 Jimmy Charles was born in 1943, in Paterson, New Jersey. At age 16, accompanied by his Uncle, he won the Amateur contest at  the Apollo theater, four weeks in a row. Bill Lashley of the newly formed Promo records heard it and Jimmy cut "A Million To One" for them. Promo records was owned by some  very shady characters in the New Jersey area. It's actually hard to tell if they were even looking for a hit record, but that's another story. Jimmy Charles recorded the song at age 15 1/2   (1958), it was not released until he was about 17 1/2 (1960). Though some  reference   books  had referred to  the Glenville release as an original label at one time, it is not true. Jimmy  Charles had two records that made the charts in 1960, and had a back up group called the   Revellettes. The Revellettes were a trio from Patterson New Jersey, and were friends  of  Jimmy - sisters Jackie and Evelyn Kline, and Dottie Hailstock. "A Million To One" peaked  out at number five in August of 1960, but let's not forget it also went to number eight on the R+B charts too. His Follow Up "The Age For Love" peaked at number 47 on the Billboard charts and stayed around for twelve weeks. Jimmy is also in the Hall Of Fame under the one hit wonders section . Jimmy has had the chance to perform a bit more over the last few years including a PBS show. Listen to my interview of Jimmy Charles from March of 2004. 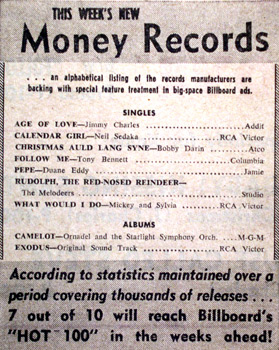 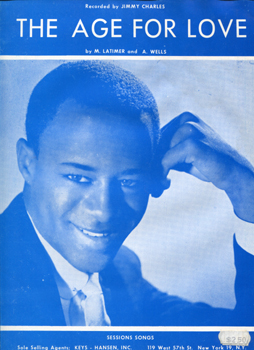 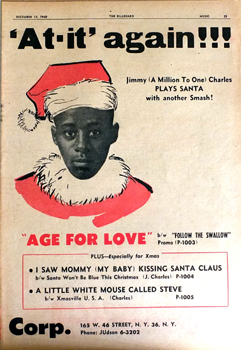 The black label release of "A Million To One" on Promo records. This is fairly unusual, and is somewhat uncommon. The only difference between this and the maroon label shown below, is the color, the fine print is slightly blockier, and an extremely small illegible scrawling in the dead wax. For the promo label, this MAY be the very first issue. The flip side,"Hop Scotch Polka ,is the first title of the song, as you will see following the pictures in the sequence below. According to Jimmy, they did 16 takes of this record. The flip was done quickly due to a very hot day, and an even hotter studio!

This is the second 1st press of the Promo release, "A Million To One." Notice the heavy block print of the Promo identification, and now the maroon color. This is by far the most common color issued. Released in 1960. On the flip side., "Hop Scotch Polka", is as above. On the bottom of the record label you can see the credit to Phil Medley's Orch. Jimmy appeared on Bandstand three times in the same month while this record was at it's peak of popularity.

I'm Getting fairly picky here. The lettering for the artist and title is a bit smaller, and the "Promo" record label lettering is bigger. This is a third "First" press. Same thing on the "Hop Scotch Polka" side. There are smaller letters on the titles, but word placement on the label is almost identical.

This is the fourth press of the Promo release. Writers credits are now given for the song, and to make room, the lettering is even smaller. The time is shifted to the mid section of the label. The last "E" was also dropped in Revelletes. And, it is now "Hop Scotch Hop", instead of Polka. On the strength of this record, Jimmy went out on a national "Show Of Stars" tour, to promote his hit record.

How about a fifth release on the reddish Promo label. This is an obvious later press, now a product of Addit Recording Corp. An address shows up on the label as well. It has also changed from Unbreakable to non breakable!

This is the Canadian release on the Reo Label. This copy shows a flip of Hop Scotch Hop, instead of "Polka." It may be possible that there are copies with the later, but I have not seen any.

Released in the UK, what you are looking at is a promotional or demo copy of Jimmy Charles "A Million To One." It is a one sided record, thus the odd picture above on the right.

This is a copy of the Australian pressing of "A Million To One." It is the Aussie London label, which had numbering that was different than the UK or New Zealand. The center insert is still intact, and "Hop Scotch Hop" is on the flip.

Here is the London UK pressing of a Million To One. It was the only Jimmy Charles release on the London label. Promo records is credited on the label. 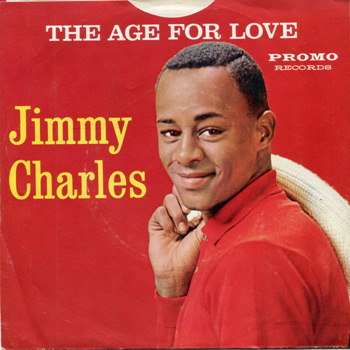 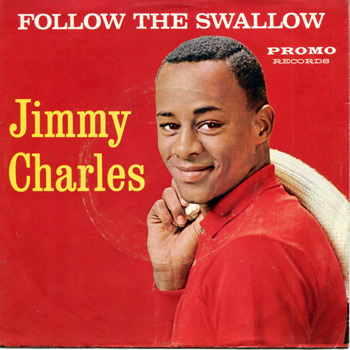 Here is the sleeve for "The Age For Love." Without doubt, the toughest of his sleeves to find, it features a new pose not shown on any other promotional material I have to date. Both sides are the same except for the record title.

"The Age For Love" was the follow up for Jimmy. It was a really great record, but didn't chart quite as high. It appeared on the Billboard top 100, peaking at #47.The Revelettes have been dropped. The original group only recorded on the first record. The flip,"Follow The Swallow" was, well, the flip. Issue number 1003 on Promo. This is the true first press on the reddish maroon label from 1960.

This is the second press on a completely re-designed Promo logo.
c

The Canadian Reo label got on board for the Jimmy Charles follow up. This must have come from a radio station, as their number sticker is on the top of the label on the plug side. 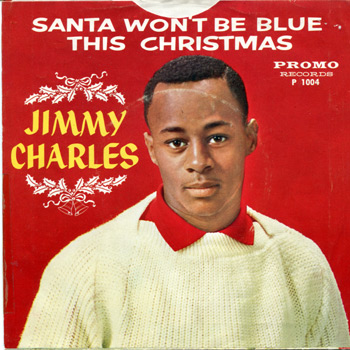 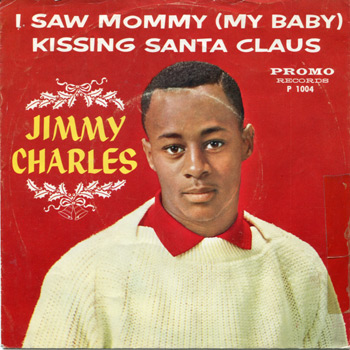 This is the official and original sleeve that was issued with Promo 1004. "Santa Won't Be Blue This Christmas" is the "A" side. The flip, "I Saw Mommy Kissing Santa Claus" is listed on the flip of the sleeve, which is the only noticeable difference in the picture.

Here are the record labels for that seasonal release, "Santa Won't Be Blue This Christmas." 1:30 of up tempo Holiday cheer . Released for Christmas in 1960. "I Saw Mommy Kissing Santa Claus" was the flip. Notice that the orchestra is now conducted by Burt Keyes. This was probably his best flip side.

Hopping on board the Christmas songs, Reo issued the two sided seasonal release from Charles. It really should have sold more copies than it did. 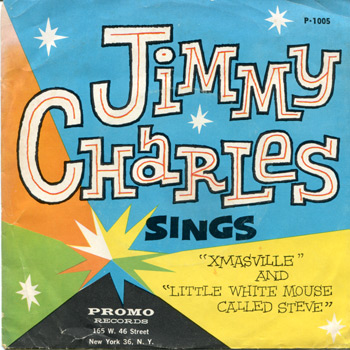 This is the official original sleeve for his second Christmas record, also from 1960, "Xmasville."The sleeve lists both titles of the record on each side of the sleeve, which is the same on both sides. "Little White Mouse Called Steve" was on the flip.

Here are the record labels. The issue is the one next in line on Promo, and according to the trade ads, both Christmas records by Jimmy were released around December of 1960. A Little White Mouse Called Steve" was parked on the flip side. I have heard from many people that really like the flip, and have memories of hearing it on the radio.

"Just Whistle For Me" is a good up tempo recording for Charles', which does deviate from his previous patterns of recordings. A very good side, but not popular enough to recapture his original success. Jimmy Charles' flip, "I Wonder How It Feels To Fall In Love", is very good. I actually prefer it to the "A" side. This is Jimmy's last official release for Promo, and his last release as a recording artist. A great two sider!

Here is the release on Glenville records. Glenville was a reissue label that featured some popular records of the 50's. Many books used to list this a the first issue of "A Million To One", but I must disagree. This was probably issued in the early 70's. I do know that the record was released twice. Shown above is the first Glenville release that included the original "Hop Scotch Polka" flip side. This record used the same issue number as the Promo label original.

This is the second issue of the Glenville label reissue. This pairs Jimmy Charles "A Million To One" with the Johnnie And Joe song "Over The Mountain, Across The Sea." Interesting note: Trip records also had a release with similar record numbers. Glenville may have merged with Trip or???

And then they issued the same pairing of Jimmy Charles with Johnnie And Joe, only this time it is on a blue label.
Updates: I don't believe there was a Promo record number 1000 or 1001. The Jimmy Charles release on 1002 was the first for the label. Jimmy had a couple of great hit records, and the others just didn't catch fire. A total of five records were released, and they all had an appeal. Surveying the emails I get, everyone remembers "A Million To One." I am surprised how many people remember "A Little White Mouse Called Steve"! Seems it must have been played in several markets, and/or "Christmasville USA" must have been flipped on the record players at home.

Where is he now? Jimmy is alive and well in Texas. Listen to my interview with him HERE!