Colorradio.com - The Story Tellers
Must Have Javascript on
For The Slideshow To Work
The Story Tellers were from San Gabriel Mission High School, located in southern California, and first got together in 1958. Pictured below left, from left to right, is Ruben Ochoa - baritone and bass, Nick Delgado - first tenor and lead, and Al Sanchez - second tenor and lead . Not pictured is Sal Delgado - second tenor and bass. They originally called themselves the Pretenders, and actually grew up together in the 1950's. Ruben Ochoa and Al Sanchez were cousins, and further, Al and Nick's fathers had sung together in a Mexican trio. The Story Tellers had one original recording in 1959 called "You Played Me A Fool", issued on Norty Beckman's Zenith and then Stack record labels. It was Norty Beckman that suggested the group name of the Story Tellers, which was quite unique. The Pretenders name had already been taken by a group on the east coast. Beckman had a record store and had heard the group sing locally, and signed them to a contract. Their record had late night airplay by several local DJ's including KFOX evening man Rudy Marini. His show was broadcast live from the Dolphins of Hollywood record store, a local Los Angeles legend. According to Al Sanchez, they had intended to cut a second record, singing the Rivileers song, 1000 Stars, but it was not what Beckman was looking for at the moment. It was what Indigo records was looking for when they pressed Kathy Young and the Innocents version shortly thereafter. The Story Tellers had some releases on the Classic Artists label starting in 1990, and all the songs are impressive. Al and the Story Tellers also recorded a song for a benefit performance to aide Rosie Hamlin, earlier this year (2007). It is a tribute to Rosie, and you can listen to it here. You can also hear my interview with Al Sanchez of the Story Tellers right HERE! 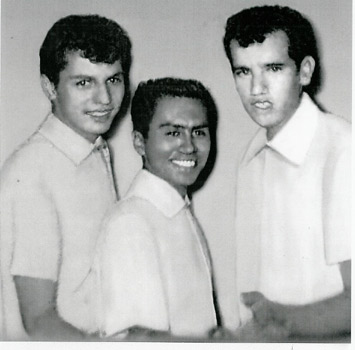 On the right is a video of the Story Tellers singing their song, "You Played Me A Fool" live in 1989 in Covina, California Sept. 24, 1989. That was their first professional appearance together since 1961 when Al Sanchez left the Story Tellers to go into the Army. It takes a little while to get started, but is a great clip of the group.

Here is the one release on the stack label for the Story Tellers. Though also issued on the Zenith label first, the Story Tellers as shown, made just the one record originally. "You Played Me A Fool" is a great ballad and got some airplay on prominent stations in the Los Angeles area at the time of issue. Produced by Norty Beckman, it's a record that should have gone farther, and headed up the charts in Los Angeles. There are a few other Stack label releases including Jody Berry on 501,and the Nortones on 502. I don't have the record, just one side is pictured above.

From 1990, here are the Storytellers on their first Classic Artists release, number 118. "Gee But I Like Your Smile", is backed with "Please Remember My Love". Both sides are produced by Dave Antrell and Bruce Patch, with Antrell getting writers credits on the flip, while Al Sanchez wrote the "A" side. This was available in black or red wax. You can click both records for a larger view. Classic Artists released dozens of great sounds from great artists from the 1950's and early 1960's.

Al Sanchez And The Storytellers next release on Classic Artists is "Heaven's For Real" and is a great side, while "This Is Goodbye" is an excellent flip. This was available in black and red wax.