Colorradio.com - The Toys
Must Have Javascript on
For The Slideshow To Work 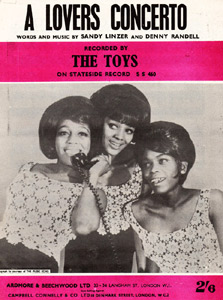 "A Lovers Concerto" got to number two on the Billboard charts in September of 1965. It was a huge record that spent fifteen weeks on those charts. The Toys landed a total of four records over the next year on the top 100, and released one original album. The original Toys were: Barbara Harris, June Montiero, and Barbara Parritt. They appeared in many shows including Shindig, Hullabaloo, American Bandstand, Hy Lit's, Where the Action Is, Clay Cole's, and Upbeat. They also had a cameo appearance in the film "It's A Bikini World." Their follow up, "Attack" did very well for them, peaking at number eighteen on the pop charts. They also recorded on Philips and Musicor, before the ride was over. In the picture below right,, I'm on the right, Barbara Harris is in the middle and Denise Fitz-Johnson  is on  the left.  Denise and  another  member not pictured,  Robin Trawick,  are performing  as the  Toys today.  This  was taken  backstage  at the Pittsburgh Benedum center in May 2002 during the Red,White, And Rock show. The Toys started out as the Charlettes on Angie 1002 with "The Fight's Not Over and "Whatever Happened To Our Love." 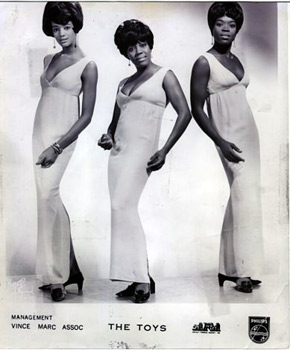 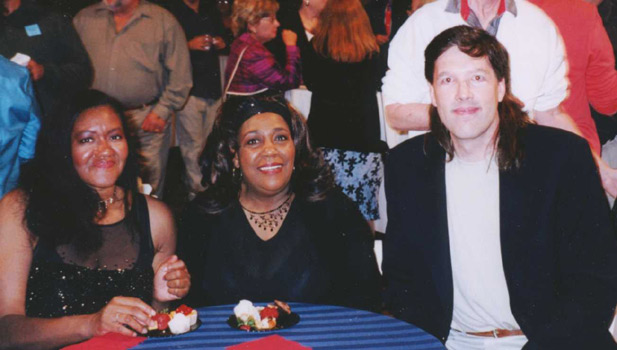 The biggest hit for the group, "A Lovers Concerto", was a smash hit in 1965. It has been a staple of Oldies radio stations ever since. Released on the Dynovoice label, it was an adaptation of Bach's Minuet in G. The flip is "This Night"

Their very successful follow-up was called "Attack." Using some of the same vocal techniques as the previous hit, Attack was a top 20 hit the same year. The flip is "See How They Run."

This is the third release for the Toys and their third chart hit. Peaking at number 85 in April of 1966, "May My Heart Be Cast Into Stone" stayed for 3 weeks on Billboard. The flip is "On Backstreet."

The fourth release by the Toys did not hit Billboard's top 100, but it did bubble under at position 111 in May of 1966. "Silver Spoon" was the hit side. A song I usually associate with Question mark and the Mysterions, "Can't Get Enough Of You Baby" is on the flip. This version was issued a year before the Mysterions released theirs. 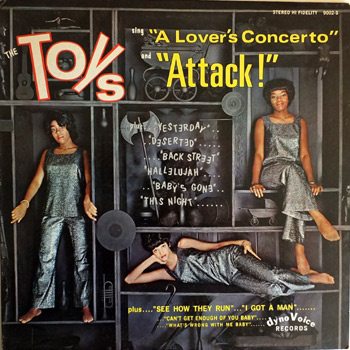 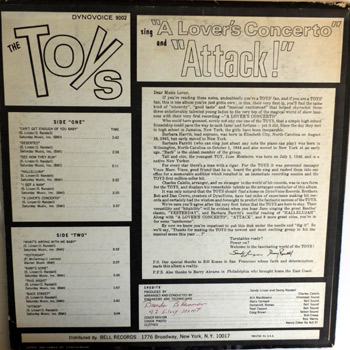 This is the stereo version of their original LP showing both "Lovers Concerto" and "Attack" as the hits. They also list "See How They Run" and "I Got A Man" near the bottom of the cover. A great group cover and a solid LP.

These are the labels from the stereo "hi Fidelity" release. 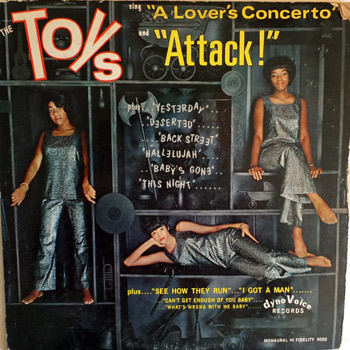 This is the monaural hi Fidelity version of their original LP.