Colorradio.com - The Innocents
Must Have Javascript on
For The Slideshow To Work 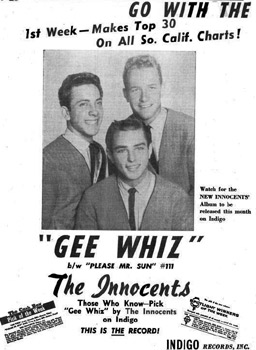 The Innocents were from the San Fernando Valley in Southern California. They met in high school around 1958, and the name of their group was originally called the Echoes. Shown below, right picture left to right are Darren Stankey, Al Canelaria, and Jim West. Although the Original group included Larry New, he was dumped in favor of Jim West and his extended vocal ability. After one recording for Andex / Keen, they had a chance meeting with Kim Fowler and Gary Paxton. Though Fowley initially expressed no interest in hearing the group, once he and Paxton did, they knew the group had a sound they were looking for and directed the Echoes over to the Indigo label under the direction of Jim Lee. The group cut their first record Honest I Do, as the Innocents, which was named after their car club. It was a hit and they made their way up the charts and onto radio station playlists across the country. Their second record also busted into the top 30 Nationally, and they were indeed an overnight sensation. Their following was huge on the west coast, though it stretched from coast to coast and beyond. The Innocents had two top 30 records by themselves and backed Kathy Young on her records as well. They appeared in numerous concerts, shows and live TV programs, including a weekly live show at Pacific Ocean Park in southern California. The Innocents continued to be in demand throughout their stay on the Indigo label. After the Indigo recordings, they waxed for Reprise, Decca and Warner Brothers. Good records but no national chart action. The Warner Brothers issue did have some play regionally. The Innocents broke up in 1964, and reunited 20 years later. They have had occasional appearances, and Jim Campbell joined the group to sing Darron's melody parts. 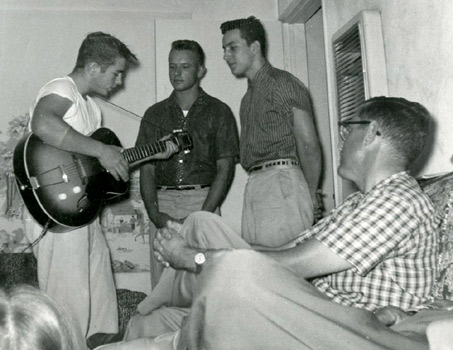 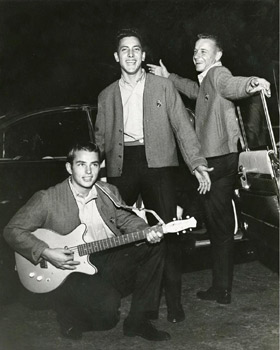 Here is the initial release by the Innocents, under their first name, the Echoes. Recording for the Andex label, they had just this one release, and the promotional copy is shown above. "Time" is the same song the Dells cut in 1957, and is a good doo wop effort. The flip, "Dee Dee Di Oh", was an ode to their girlfriend, and is a nice upbeat song. Andex records had artists like the Travelers/Pilgrim Travelers, Kylo Turner and the Montagues that recorded for the label. Andex producers included Herb Albert and Lou Adler.

Many of the early releases on Andex used the orange label with white lettering. These were using the 2000 and 4000 number series. Apparently when Andex changed the numbering scheme, they must have decided to press some of the stock copies on the Orange label. It would make sense that they came first, before the gray label, as shown below. Hermosa Music has publishing on both sides of this really nice effort by the group. This record was also subsequently issued on the Keen label in the same year, 1959. Check out the dot pattern on this copy, in the 2 and 8 o'clock position. They are different then most of the other copies I have seen.

Here is the stock issue on the gray label. All the information is the same, the record number and publishing info is just reversed in it's position.

Now on Indigo records, the Innocents had their first record for the label break the Billboard top 30. "Honest I Do" peaked at number 28 in 1960, and spent ten weeks on the charts. It was a huge hit on the west coast, and charted much higher on the local radio station surveys. The flip was aimed at the dance craze, and called "My Baby Hully Gullys." Both sides of the record were written by all three members of the group.

When the Innocents recorded the previous hit record, they had also recorded two other tracks that were owned by Kim Fowley and Gary Paxton. Seeing the success of the first record, Paxton and Fowley sold the sides to Transworld, and it was released locally in Los Angeles, and probably didn't sell much outside the west coast. Above is the promo version of "Tick Tock" flipped with "The Rut." Tick Tock is a ballad utilizing the three voices well. The Rut is an instrumental. Released in 1960

Here is the maroon stock Trans World release. Notice that the "A" side is written by the Innocents and the flip is credited to the producers, Paxton and Fowley. Also credited was Bobby Rey who recorded several instrumentals on local Los Angeles labels, and one for Indigo.

Before they could get back to issuing another single for themselves, they backed Kathy Young on her monster 1960 hit "A Thousand Stars." They are credited on the label and the record peaked at number three on Billboard. It is an excellent remake of the Rivileers record originally recorded in 1954. Shown above is the promotional copy. Released in 1960.

This version of "A Thousand Stars" stayed on the charts for seventeen weeks. The flip was "Eddie My Darling", a great doo wop song, not to be confused with Eddie My Love. A nice two sided record for the Innocents to be associated with. For more on Kathy Young, visit my page HERE!

This is a little different label variation showing production credits with Jimmie Lee on the middle left of the label.

About a month later, the Innocents next recording entered the charts, hit the number 28 position and stayed for eleven weeks. Another strong ballad, "Gee Whiz" could be heard blasting out of radio speakers everywhere. Somewhere between a doo wop and a vocal group record, it was well received. "Please Mr. Sun" was also a nice ballad. It had been recorded many times,and the most recent chart action by Tommy Edwards a year earlier. This was issued in late 1960, and notice the logo change of Indigo records. It is now block letters.

The Innocents backed up Kathy Young on her second release, "Happy Birthday Blues." This was issued just about the same time as the Innocents third release shown below. It was flipped with "Someone To Love." Happy Birthday Blues spent ten weeks on the Billboard charts and peaked at number 30. The Innocents were red hot and involved with four top 40 chart records in a row.

The Innocents next solo effort for Indigo records in 1961 was "Kathy", written by Jim Lee about Kathy Young. A nice ballad, it failed to ignite the national charts, but still got airplay on the west coast, especially Los Angeles. "In The Beginning" was an interesting side and quite a departure for the group. The group was still heard prominently on this bluesy waxing that was probably fun to perform live, if they got the chance.

Up next was the Jesse Belvin song, "Written" by John Dolphin of Dolphins Of Hollywood fame called "Beware." The guys did a credible job on it, and was a nice group effort. For the flip, they chose "Because I Love You So" and they were back in the doo wop mode with a dandy.

An interesting selection for their next release, they chose the Ritchie Valens song "Donna." A decent remake with a talking bridge of sorts, but likely doomed from the start. "You Got Me Goin" was the flip, a song I associate with the Sultans on the Tilt label. This record was released in 1961

Next to the last for Indigo was "Pains In My Heart" which was written by all three members of the the group. It's a nice ballad with the typical Innocents sound. "When I Became A Man" makes this a two sided ballad record.

The last record for the Indigo label, "Time" is the same cut as the one for the Andex label shown at the beginning of this page. The writer credits and times shown are different, but they are the same take. The only minor difference I could detect is the Indigo record(s) faded out an extra 2 or 3 seconds. "Dee Dee Di Oh" is also the same cut as Andex. 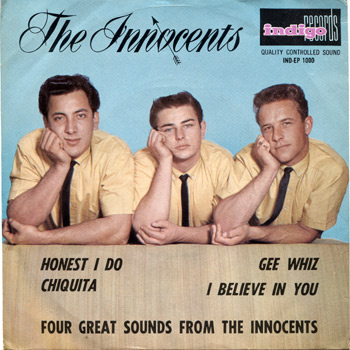 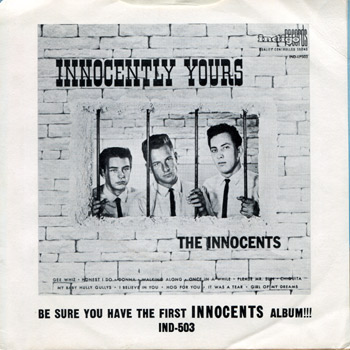 Here are both pictures of the first Indigo label EP, and the only one by the Innocents. Released to showcase their two big hits, it also included two songs that were never released on 45. "Chiquita" was written by all three members of the group, and "I Believe In You" was the Robert And Johnnie song from a few years earlier. Both good outings by the group.

You can see both sides of the record above. As was most of the records that the Innocents recorded on Indigo, Jim Lee was the producer of the sessions. This was probably issued about the same time as the LP came out. 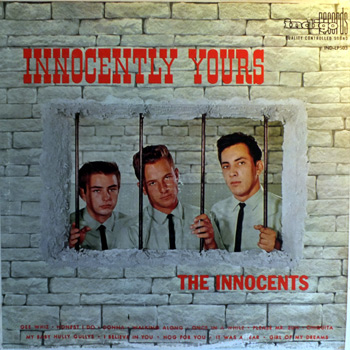 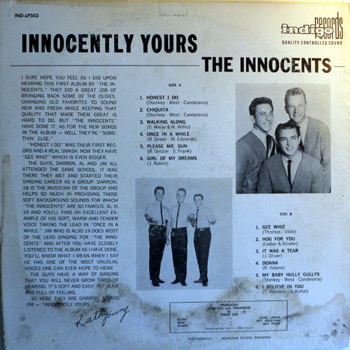 The Innocents had one original LP on the Indigo label, and it had quite an interesting cover! The title of Innocently Yours, was classic given the picture. Many of the "A" and "B" sides of their 45's made it on the LP, and they included a few others, including "I'm A Hog For You", "Girl Of My Dreams", "Walking Along", "Once In A While", and "It Was A Tear." The liner notes on the back were written by Kathy Young.

Here are the labels and you can see all the titles included on the LP. You can click to enlarge the labels. Kathy Young also had her own LP on Indigo as well as an EP.

The Innocents also recorded on other labels besides Indigo. Their first stop was at Reprise. "Oh How I Miss My Baby" had the Innocents sound. A group record with an orchestra, is was a decent side for them. The flip was "You're Never Satisfied" and was a rare up tempo for the innocents, featuring an organ. The promo is shown, and it should be noted that "Be Mine" was also issued as the "B" side replacing You're Never Satisfied. This recording was released in 1962. Neither side had writing credits from the Innocents.

This is the stock reprise copy in the normal light orange label with the logo band at the top. All information remains exactly the same, as it should.

Next stop, Decca records and the song "Don't Cry" in 1963. A good sounding ballad that was really the Innocents trademark. The up tempo"Come On Lover" was the "B" side, and was pretty good. This copy was a promo for radio station WPEP. This came out in 1963, but had no real chart action. Both sides are written by the group.

Wrapping it up for the Innocents, a trip to Warner Brothers for"My Heart Stood Still" in 1964. It is a classic Rogers And Hart song. On The flip was a song written by Indigo producer Jim Lee, "Don't Call Me Lonely Anymore." Both were ballads that still sounded like the Innocents, but started taking on some of the sounds of the mid 60's. Notice these also had production credits to Lee Hazelwood.