Colorradio.com - Radio Shows
Must Have Javascript on
For The Slideshow To Work 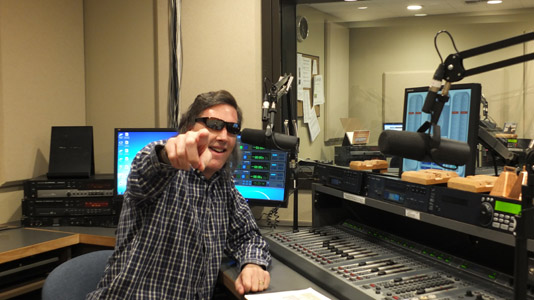 The Rhythm And Blues Review has ended after a 33 year run. I first signed on the air in June of 1987. We were just new to CD’s and soon had a CD player in the studio along with the usual turntables and cassette tape players. We even used an older cart machine for our promotions. When I started, It was located in the Miners foundry in a small studio and work space. We moved across the street to the Bridge building, and then to the new building built across Bridge street, going north. The Color Radio theme was used throughout the show, and I played vintage jingles - including many of the original Pams spots used in the late 1950's and early 1960's. The program was done in an upbeat style with fast moving songs and interesting information scattered throughout the show. I blasted out the best of R+B, Doo Wop, and Rock And Roll from the early 1950's through the early 1960's. Requests and dedications were always encouraged, and usually played the same night. KVMR-FM is located in Nevada City, above Sacramento, CA, and is a unique non- commercial radio station serving a wide over the air audience in a large area of Northern California from Stockton to Vacaville to Alta to Downieville, and beyond. KVMR has several translators that allow them to reach Tahoe, Truckee, Angels Camp, and Placerville. The show was also broadcast live on-line. The last regular radio show from me was broadcast live on March 21, 2020.  After that, the studio was closed to live shows due to Covid 19. My last show was September 5, 2020, I produced it at home and was a tribute to many of the artists that I interviewed over the years and included music by those same artists. I enjoyed broadcasting my version of radio and hope that if you had a chance to hear any of my shows, you enjoyed them as well. If you want to see some of my previous playlists online, go to spinitron.