Colorradio.com - The Eternals
Must Have Javascript on
For The Slideshow To Work 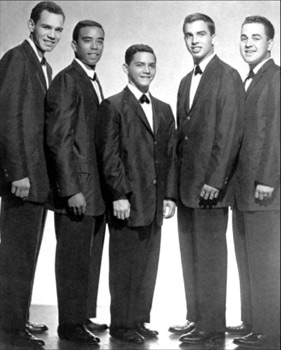 The Eternals were a fine group that released just three records in their brief, but exciting career. They were from the Bronx, and included Charlie Girona on lead, first tenor Fred Hodge, Ernie Sierra as second tenor, baritone Arnie Torres and Alex Miranda with the distinctive bass voice. They were originally called the Gleamers, and the Orbits, but upon release of their first record, it was changed one last time to the Eternals. According to one interview with Ernie Sierra, he said they came up with the name by way of their manager, Bill Martin, when he brought out a Bible and talked about eternity. The Eternals first song was originally title Christmas In The Jungle, but that Holiday was still eight or nine months away, so they re-worked it as Rockin In The Jungle." The group recorded the tune in the Beltone studios, and it appeared on Morty Craft's new Hollywood label. Hollywood had been a big record label earlier, but he revised the logo and used the same name. The record did very well in New York, busting into the top 20 on many charts. It also landed on the National Billboard charts, peaking at number 78 in the summer of 1959. Most of the cool jungle sounds and bird calls were done by Arnie Torres. With a hit record, the Eternals were performing on the east coast, and appearing on several prominent DJ's shows in the New York area. Below are many different label variations that were produced of their first record. Coming soon, Babalu's Wedding day and more of the Eternals story. 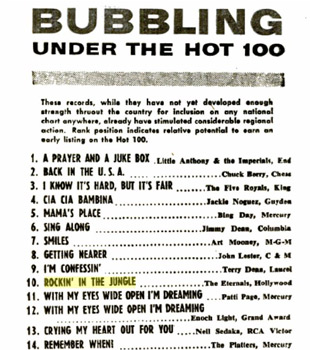 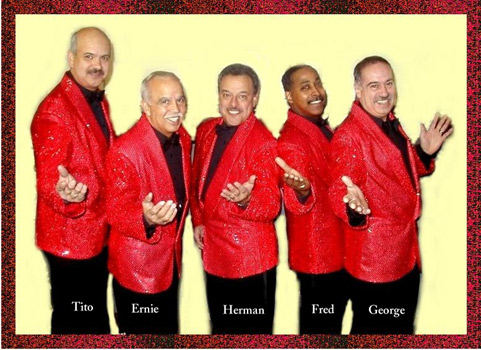 For the Eternals first record, this is the first pressing. It's on the Hollywood label, where the logo is at the top, and Most importantly, it's the yellow label. "Rockin In The Jungle" was a national hit, and especially big on the east coast. "Rock N Roll Cha Cha" was on the flip. On this copy, it is shown as Transphonic Productions.

This must be the second issue for the Hollywood label. It is white, but not necessarily a promotional issue. As we can see, this and the previous yellow copy have no mention of the "Distributed by United Telefilm on it. This is important, and is similar to my page with Gene And Eunice, where some of the Case issues were also distributed by UT. Here, it is a Trans-Holly production.

Here is the promotional issue, finally! It does show the distribution and it is clearly marked as "Sample Copy Not For Sale"

Next in line is this blue label press with silver lettering. It is a stock copy of the promo shown above. All lettering is the same and in the identical locations of the label.

A further issue is white, again, this time with Columbia master numbers in the dead wax and on the label. The distribution information has been scooted down to the bottom of the label. Everything else remains similar.

This is most likely a later pressing of the blue label, with the logo at the top and now in block letters. It is similar to the yellow label, except the lettering is smaller. It also does not show the distribution deal with United Telefilm, also like the yellow label. When I examine my copy closely, the lettering and lines on the label are not quite as sharp as I would expect, which is one of the qualifications you look for in a reproduction. I won't call it a repro, and further, I can confirm the dead wax numbers and markings are consistent with the originals. At best it is an odd second pressing.

This is certainly another strange pressing, if nothing else. The maroon/red label surfaced on other recordings for the label, but this lists the Eternals as the Enternals. My first guess is that it is a vintage boot. It was made at a less than above board pressing plant, and they didn't get the group name correct. Further, they didn't get the label exactly right as they called it A Trans Hollywood Productions. It could have been pressed at any time during the record's run. The dead wax numbers are not exactly the same as the yellow copy, so I submit this as last in the string of record releases. Did somebody really make this big of a screw-up?

This is the first of at least three different pressings of the Eternals follow up record, "Babalu's Wedding Day." Since it is a promotional copy, I am showing it as the first label in the series of three. They used the same "Sample Copy Not For Sale" as the "Rockin In The Jungle" promo, but below the lines. The United Telefilm distribution is shown, along with Joe Rene given credit for arrangements. Released in 1959 and "My Girl" was on the flip.

This is the same later blue pressing that was also shown with "Rockin In The Jungle." Not much additional information is on the label, other than the absolute necessities.

Here is what I referred to as likely an early boot of the record, on the last entry of Rockin In The Jungle." It is virtually identical to the "jungle" boot, so it may have been pressed at the exact same time.