Colorradio.com - Mickey Hawks/Night Raiders
Must Have Javascript on
For The Slideshow To Work 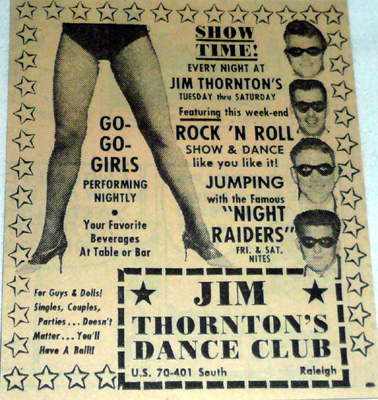 If you are looking for Doo Wop, hit the back button on your browser or smart phone. This is straight ahead rock and roll from a group that knew how to do it right. Tickle the ivories? No way, pianist and vocalist Mickey Hawks slammed em'. Born July 17th, 1940 in North Carolina, his mother played the piano, so he started in at age 13. Hawks and Bob Matthews, both eventual Night Raiders, first played together in a rock and roll group called the Rhythm Rockers, in and around the High Point area of North Carolina. Mathews soon joined Dallas "Moon" Mullins and his four piece country band that also played gigs in the High Point area. At Bob Matthews request, Mickey Hawks hooked up with the band making it a total of 5 members in 1957. Their first record came out on three different labels. First on the Robbins Red label, owned by Eddie Robbins, and cut in a studio converted from a "screened in" back porch. Then it was issued on the Mart label from Martinsville, Virginia, with the label showing Moon Mullins and his Night Raiders, and then on the Chicago based Profile records. They ripped it up in the Chicago area, selling a reported 50,000 records. Folks, these records have to be heard to be believed! Check out my interview with original drummer Bob Matthews HERE! It was recorded in December of 2004. He and the group made some amazing records. 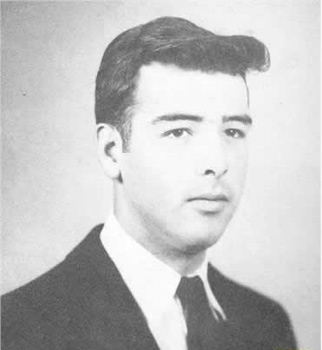 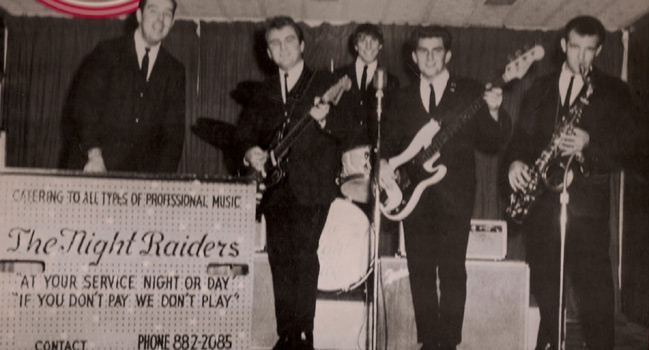 "Bip Bop Boom" was the first recording they made, but this is actually the third label is was issued on. It supposedly sold about 50,000 copies in the Chicago and Midwest area in 1959. It is also reported to have been a number one record in Johannesburg, South Africa, on the Trutone label. Mickey Hawks has the lead vocals and is banging the piano. The flip, "Rock And Roll Rhythm" was written by Mickey Hawks and Bob Mathews, and rounded out a good pairing. Released in 1958.

The follow-up was actually an instrumental called "Cottonpickin." It was done in the usual rockin style as other recordings by the group, and is quite enjoyable. It features some great guitar work by Bill Ballard, and he wrote the song. The flip, Hidi Hidi Hidi" showcased some great piano work from Hawks. Based on the label numbers, it would seem that the "A" and "B" sides should be reversed, but it is correct as shown. Notice that the "Hidi Hidi Hidi" side is credited to Mickey Hanks. My understanding is that there were original pressings in the late 1950's with this typo. Maybe I am wrong? The dead wax numbers are exactly the same with "Sheldon" stamped on both. See the picture set below for the correct label name credits. This record was released in 1959.

Here is the same release with the more familiar, and correct name of Mickey hawks. The rest of the label information remains the same. Notice Mike Oury has song writing credits on the "A" side, and has publishing as well. Oury was the owner of Profile records and also shows involved with publishing.

In 1963-1964, the record was reissued on the Hunch label. It was released by National Record Mart in conjunction with Gateway Records of which they were a partner with in Pittsburgh, PA. They released only the version with Hanks last name, for some odd reason.

Just when you thought it couldn't get any hotter, along comes "Screamin Mimi Jeanie." Actually the "B" side of the record, it is my favorite of all their issued recordings. 1:45 of straight ahead smoke! Mickey Hawks is on lead vocals, and a hot drum intro which continues up to the last note of the record, by Bob Matthews. "I'm Lost" was actually intended to be the plug side, but if I had been a DJ at the time, I would have flipped it! Issued in 1960.

Credited to Moon Mullins and the Night Raiders, this 1961 release is another decent outing for the group. Not quite the up tempo treatment as some of the other singles, but a nice effort. "Gonna Dance Tonight part 1" and "Part 2" on the flip, which is an instrumental carrying the same theme from the "A" side. This is on the Lance label out of Virginia, owned by Jim Eanes. 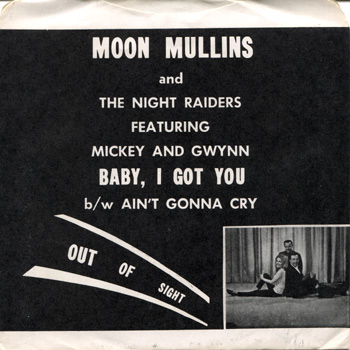 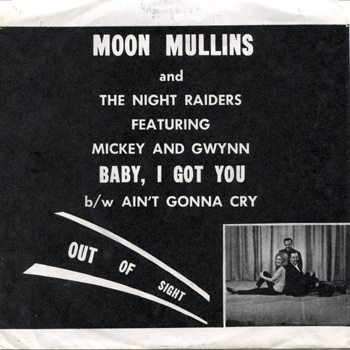 Here are the record labels for the Piedmont disc. It is a much different type of record pairing for Hawks and Mullins. This was likely released around 1968. Stoney Bowman was playing guitar on "Baby I Got You", and he still plays today. 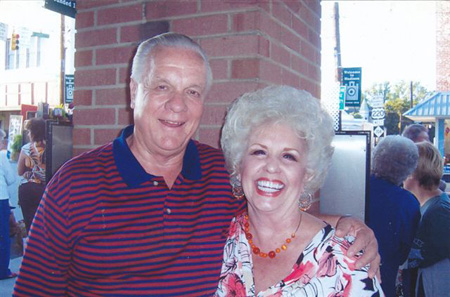 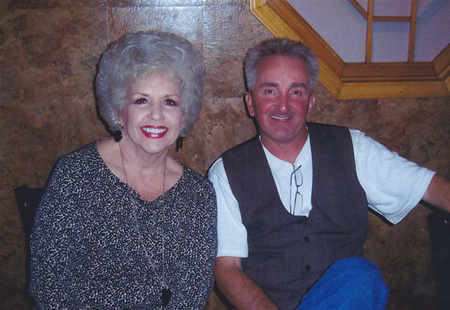 On the left is a more recent picture of Gwen And Moon. Gwen actually sang with the Night Raiders for almost nine years. Gwen has had the pleasure of singing with many artists throughout the years including Rufus Thomas, Loretta Lynn, Otis Redding, Jerry Lee Lewis, BJ Thomas, the Temptations, Percy Sledge,and list goes on. She did not do any other recordings other than the record on this page, above. She keeps in touch with Moon, John Owens, Don Mills, and Stoney Bowman who played guitar on Baby I Got You. Gwen's son Jeffery, is the son of Bill Ballard (guitar player). Gwen and son Jeff are pictured above on the right. 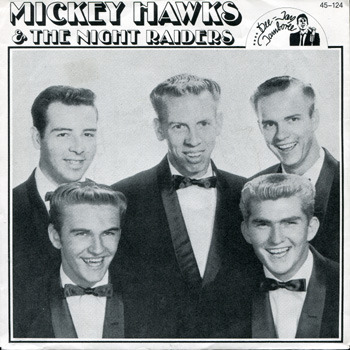 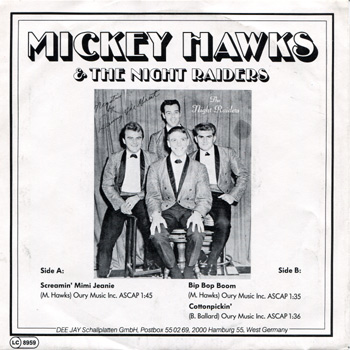 From Germany, this EP on Dee Jay Jamboree was issued with a great two sided picture sleeve. The picture on the left, From left to right, starting in the back row, Mickey hawks was piano and vocals, Bob Matthews played the drums, Moon Mullins guitar,sax and vocals. On the bottom left was 14 year old Bill Ballard on vocals and guitar ,and John Owens on vocals and bass. The picture on the right was taken after Bob Matthews left the group. Mickey Hawks is in the back, Ballard is on the left, Owens on the right, and the name of the drummer that replaced Matthews is likely Leroy Butler, and seated in front. Two great pictures of the group!

The pictures of the labels are shown above. One record on the A side and two on the B side.

Released in 1989, C-Horse issued a 45 with two songs written by Danny F Caldwell, who was also shown as a coproducer. "Me And My Harley Davidson" was flipped with "The Good Old Days. Both records are rock and roll with Mickey Hawks out in front and a female group named the Austin Sisters backing him up. C-Horse was based in High Point NC. 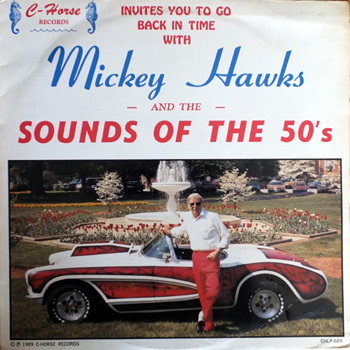 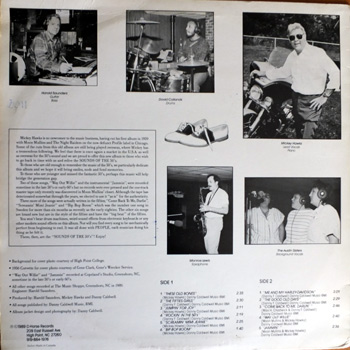 C-Horse release an LP that included the previous single as tracks one and two on side B. Other personnel included Monroe Lewis on Saxophone, David Collands on drums, and Harold Saunders on guitar and bass. Mickey Hawks was on Piano and vocals. Not too long after this album was issued (1989) Mickey Hawks passed away.

These are both of the record labels for the LP titles "Mickey Hawks And The Sounds Of The 50's" Two tracks were actually recorded in the late 50's or early 60's but unreleased until this LP. A couple of others were written back then, and recorded for the first time on this LP. 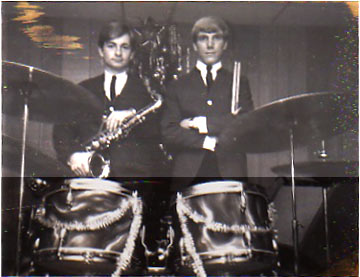 Mickey Hawks was actively performing before his death in August of 1989. Bill Ballard passed away in 2005. Bob Matthews is alive and well in North Carolina, and can be heard in a great interview HERE! Moon Mullins passed away in June 2014. He had retures from the radio station, dance club, etc.

Thanks to an email from his daughter, John Owens has been located and is living in Summerfield, NC. I did hear from Gary Hartle, a later member of the group, circa 1965. He played sax along with Gilbert Poole on Organ, Leroy Butler on Drums and Ish Brady on piano. The band did not really exist with that line-up past about 1968. Ish Brady passed away around 1976 and the last band he was with was called Kallabash Corp. Gwynn Kellum currently lives in Walnut Cove, North Carolina. Also mentioned have been Roger Goins, Ronald Coleman, Johnny Auman and Sonny Boykin. Gary recalls playing at Moon's (Mullins) Danceland in Endosymbiont, NC, and the Night Raiders were the house band They also appeared on Jim Thornton's Dance land in Raleigh . It would be taped on Thursday night and aired on Saturday evening.... almost the same time they played at Danceland! Leroy Butler was in a Christian rock band 35 years ago, but has not been heard from. Sonny Boykin has his own club in NC. I now have a page devoted to group members getting in touch with long lost band buddies. With the Night Raiders group, there was obviously many iterations. See the page I mentioned HERE! If you can fill in the blanks, or even add a few, I welcome the input.