Colorradio.com - Joyce Webb
Must Have Javascript on
For The Slideshow To Work 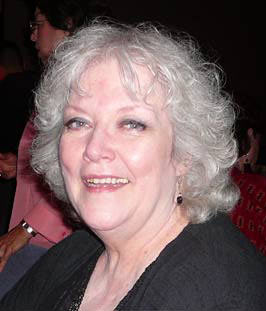 Joyce Webb started singing when she was 3 years old at "Tourist Courts" in Texas, and she serenaded the soldiers for spare change. She loved it then and has continued singing ever since. She sang with the Marching band in school, had her first professional gig at age 14, and soon went on to have a local TV show in the Austin area with Cactus Pryor. "Now Dig This" was the show on local KTBC TV, and that soon lead to two singles of her own with Domino records. She was also on the Slades "You Cheated"- she was singing the Doo Wop in the background! She continued singing backups on many Domino sessions and had her own group the "Debs." Other credits include working with Bobby Doyle- starting with the Slades and continuing until his passing in 2007, a brief stint with the New Christy Minstrels, many 45's in the 60's and 70's, and the featured vocalist with the Houston Pops Orchestra for ten years. This page is focused on her individual recordings, with her name on the label. Trying to capture all the projects she was involved in over the years would be a daunting task. Join me as we review some of her solo efforts. For the full Domino Records story, click here. Joyce Webb graciously agreed to an interview with me, listen to what she is doing now and some great history of her outstanding career. 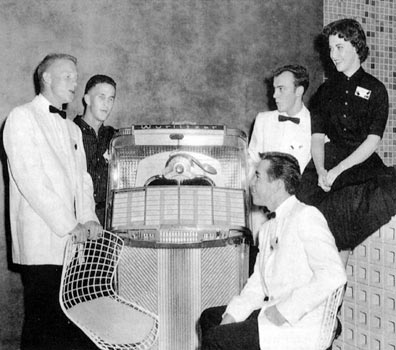 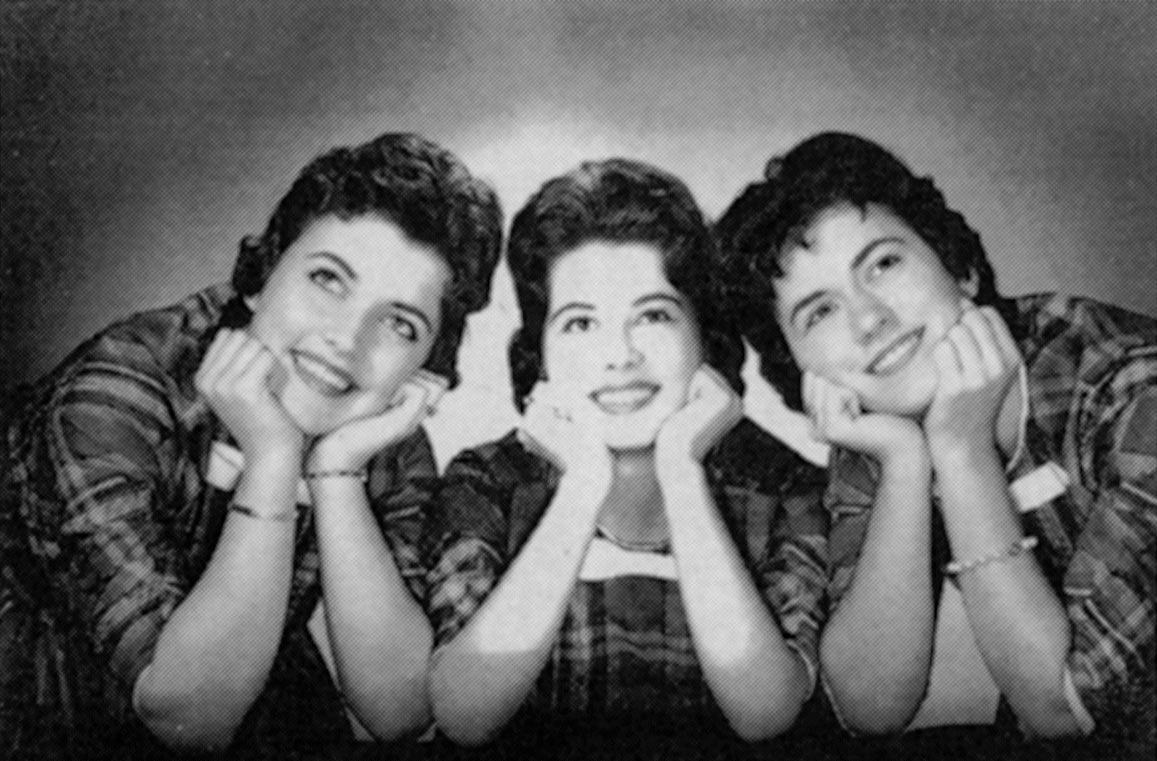 Joyce Webb and her first release for the Domino label called "Right Here!", and is backed by the Slades from 1958. The flip side is "After You've Gone", and also included the Spades. From her informative description in our interview, Domino records really let the artists create their music, without being over-produced. Joyce wrote the flip side.

Joyce Webb sang "Ain't That Just Like A Man", her second Domino records release, The issue date was 1958. The flip side "I Don't Care", is my preference on the best side of the two. A local hit to be sure, it had lots of exposure in Texas. 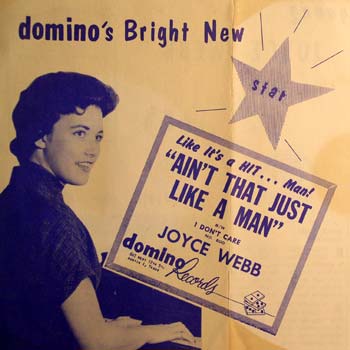 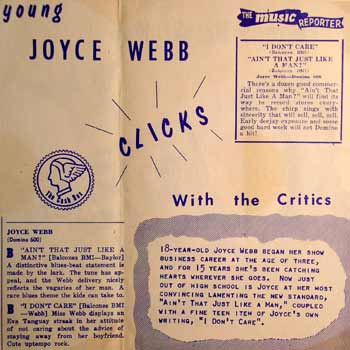 Joyce Webb had a picture sleeve issued for the previous record, which is shown above,with her sitting at the piano. On the back of the sleeve, are record reviews from Cashbox and The Music Reporter. Click for enlarged pictures.

Joyce Webb was one of the first artists to record on the Detroit based Ric Tic records. This is the next recording I show in her career, and was from 1961. "You've Got A Whole Lot Of Living To Do" backed with "Closer To The Blues." Leonard Reed produced the session and Co-wrote the songs. Sammy Lowe conducted the orchestra. Ric Tic was part of the Golden World label. The promo version is shown above.

Next was Detroit's Golden World records. "Laughing To Keep From Crying" was the "A" side. and "It's Easier Said Than Done" was the up tempo flip. Leonard Reed was back producer. Two great sides on a classic Detroit label.

I don't show an issue before 1967, when "Sing A Rainbow" was recorded for Warner Brothers. The flip was "The Last Time", and It was written by Joyce Webb and Bobby Doyle at 3AM one early morning, outside Paul's Sidewalk Cafe in Houston. Both sides were produced by Steve Tyrell. This is the promo issue.

Joyce Webb recorded the first of her two records from 1969, "If I Can't Have You." Written by Jeff Barry and Ellie Greenwich, and released on an ABC subsidiary called Probe records, it has her singing in a different style then previous records. And now, a show of hands for those that think Joyce Webb can rock with the best of 'em. "I Believe In Love" was straight ahead rock and roll for her. Listen to this clip as she conducts a microphone check on your basic "Wild Woman Scream! 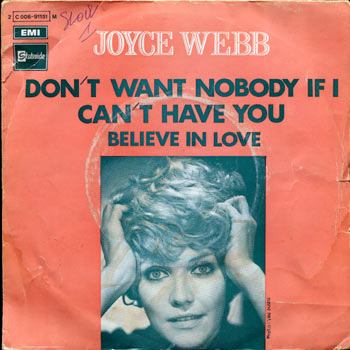 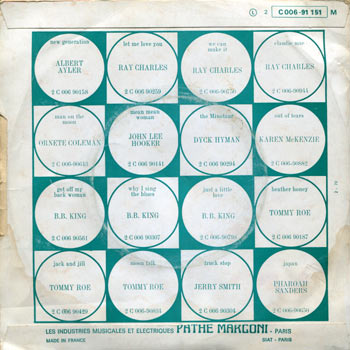 In case you thought Joyce just had records released in the US, check again. This is the picture sleeve from her record issued in France, and is the same pairing as the previous record on the Probe label. Probe was a subsidiary of ABC, and Stateside released it for those in France to enjoy. There was a picture of Joyce on one side, and a listing of some additional US records that could be obtained from Stateside records.

This is the Stateside 45. Proper credit is given to Probe and ABC on the label. Running times were also added to the labels. This was likely a fairly limited production disc.

Still in 1969, "I Don't Wanna Be Left Outside" was her next issue. The familiar name of Ellie Greenwich pops up again in the writing credits. "Tears To Us" was the flip. Both sides produced by Dean Christopher - just like the last record - and this time recorded for the Columbia label. The promo is shown above.

Joyce Webb's last recording that I can account for, is the great Little Anthony standard "Tears On My Pillow." She does a great job with it, including a talking bridge. This is the original issue on the Lee Roy label out of Houston, Texas. The label was owned by Lee Savaggion and Roy Head. Lee was Roy's manager and she worked with Roy for a couple of years. The extremely country sounding "The Wild Side Of Life" is on the flip side, Released in 1975.

The record was apparently sold to Epic records, and this is the promo version, which has the same song on both sides- one in mono and the other is stereo. The publisher is different and the association was changed from BMI to ASCAP.