Colorradio.com - The Spades/Slades
Must Have Javascript on
For The Slideshow To Work 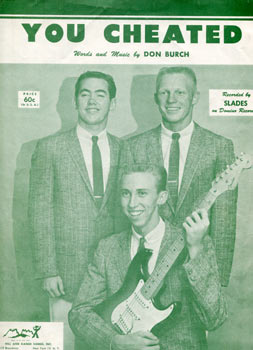 The Slades were a vocal group out of Austin Texas, and attended the local McCallum High School. Personnel included John Goeke, Don Burch,Tommy Kaspar, Bobby Doyle, and Jimmy Davis. The first four were on their first recording of "You Cheated",and they added Davis on the second disc. Their second recording for Domino records was their biggest."You Cheated" peaked at number 42 in 1958 on the Billboard charts. The disc also included Joyce Webb singing the doo wop parts. It was the original recording of the song,recorded before the Los Angeles based Shields covered it. The Shields did have the biggest hit with it, but there is always something special about the original. Further, the Slades record was still popular enough to earn them a spot on American Bandstand. The Slades had many follow up records that sounded really good. They were promoted the best that Domino records could, and had a few picture inserts made for them. They really were the flagship group for Domino, and many of the sides were written by one or more of the group members. The following are most of the records released by the Slades, including records they provided background vocals on. Listen to an Interview I did with original Slades member John Goeke, recorded in August 2009, HERE! 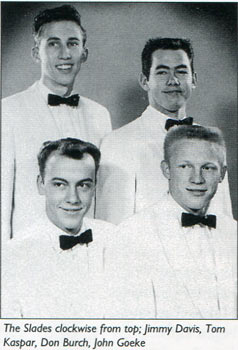 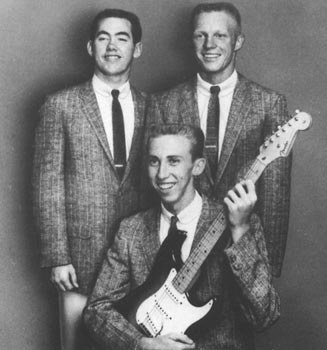 The first release on the Domino label and the first for the newly formed group called the Spades. "Baby" backed with "You Mean Everything To Me", was a great initial effort by the group and Domino records. This record did well enough that Liberty records was the label chosen to distribute it on a more national level. The initial copies still showed the Spades, and it was somewhat changed quickly to the Slades for obvious political reasons. The record sold fairly well for the group.

This is the first release, on the second label, by the Spades called "Baby." It was originally issued on Domino 200 as shown in the previous pictures. It was then distributed on Liberty. On the flip side is the song called "You Mean Everything To Me." They took their name the Spades, as it related to a deck of normal playing cards. This recording was issued in 1957, and sold well regionally, but not enough for the Billboard top 100. The white label promo is shown. Liberty was a big record company and issues promotional copies for just about every record they manufactured.

Here is the regular Liberty label stock release. After the name change decision was made, Liberty had to stop production on all stock copies of the Spades named releases, and then issue the promo's and stock copies again with the Slades name change on them. Not real complicated, but certainly costly, though the big label easily absorbed them.

This is the first 78 issued for the Spades and Slades. This is a Canadian pressing on the London Liberty label. It's nice that Liberty London and all the Liberty iterations of the Spades/Slades song included the group members underneath their name on the label. That includes Joyce Webb who often is not associated with the recording.

This is the Canadian 45 RPM pressing of the original Spades group. This was manufactured by London Liberty. You can see that with this arrangement, the same record number is used.

This is the promo copy of the second pressing of the liberty label issue of the Slades first recording. The name was changed after complaints came in from "Politically sensitive radio stations" that objected. Some minor label changes can be seen between the the first and the second pressings. Although the labels look the same, the Spades record was also issued in mid stream with the Spades on one side with Baby and the Slades label on the flip with You Mean Everything To Me. They may have tried to use up some labels, but more likely it was just a mistake.

Here is the Liberty stock issue on the dark green label. Many minor lettering changes and placements occurred, but the information was basically the same. This version would have sold the most copies by far. All personnel are again mentioned at the bottom of the label. And take your pick for the "A" side. KOBY in San Francisco jumped on the "You Mean Everything To Me" side, while KILT in Houston was on the "Baby" side.

Released about the same time as "Baby", and cut at the same recording session, here are the Slades backing up Joyce Webb on her first release on Domino, "Right Here." The unusual issue number is 300 and then 400 for the flip side. On the flip, Joyce Webb with the Slades again, providing back-up on this 1957 release,"After You've Gone." Joyce Webb was a popular favorite from the local TV show"Now Dig This", hosted by Cactus Pryor on local KTBC-TV in Texas.

Here are both sides of their big hit, Autographed by four of the five members of the group. Tommy Kasper and Don Burch on side "A", John Goeke and Jimmy Davis on the flip. Only Bobby Doyle is missing.

The Slades biggest hit from 1958."You Cheated"was huge in Texas and the gulf area. It's ride on the charts was hampered by two things: The decision made by Domino to distribute it by themselves nationally, and a fine competing version by the Shields hitting the charts. The flip side "The Waddle", has a bit of "At The Hop" to it, an up tempo rock and roll song from the boys. There was a definitive pattern by the Slades: A ballad on one side, and the flip had an up tempo recording.

Canada's ghost label, Sparton records, got into the act, and distributed the record for the masses in Canada. This is the 78, and was a release only found in Canada. I can't confirm any Domino 78's issued in the USA.

The 45 RPM record on Sparton. Domino records label credit can be seen on the middle left of the label, and as usual, Sparton used there own record numbering system- 4-636R. 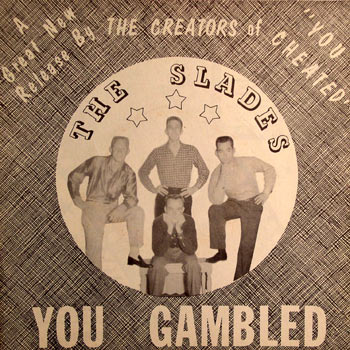 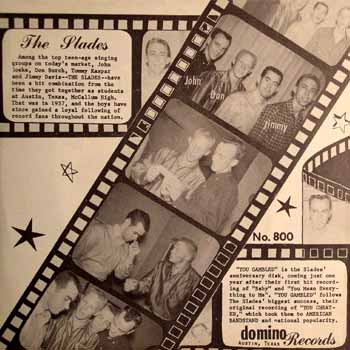 This is an insert. This was issued in limited quantities on it's release. Click to enlarge. The backside of the sleeve gives some limited group information, and is more focused on the pictures. Picture sleeves and inserts were a great way to promote you talent, but they came at a cost to Domino records. Both pictures above can be enlarged.
c

The Slades 1958 follow-up was the similarly titled and "You Gambled." Hoping to cash in on the big success of "You Cheated",the record was not a huge hit. Regional play from Texas and other areas was not enough to break into Billboard's top 100. "No Time" was the flip of Domino 800. Although a decent two sider,the huge sales were not there. Part of the problem was the distribution of the discs by Domino. In a time where payola was king, more palms should have been greased.

Though a sticker covers the record label Reo, it is a Canadian issue of You Gambled and the third different Canadian label used. It's sales started very promising, and certainly made good showings on a few local charts. For some reason though, it was decided to press it on Reo instead of Sparton, like was done on You Cheated.

This is the promo version of "It's Better To Love."Writing credits, as with most all of the Slades releases,continue to include members of the group. Writing, playing instruments, and singing, they were a self contained group. The flip side"Just You", was their next two sided attempt to crack the elusive Billboard charts in 1959. Unfortunately, not much more than spotty regional sales occurred. As you may notice, the Domino records logo remains the same.. 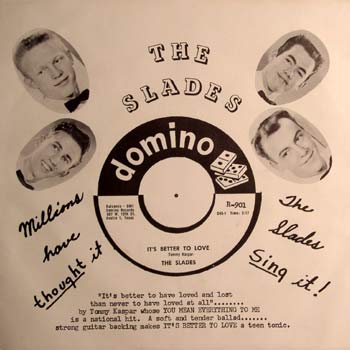 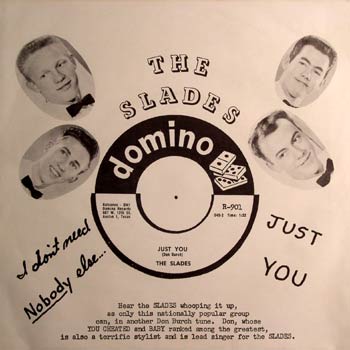 Promotional only sleeve for "It's Better To Love." Domino attempted to explain a little bit about the songs on the record, besides including pictures of the group. Both pictures above can be enlarged.

From 1959, this stock regular release of "It's Better To Love" came out as Domino 901 . Some sources say the versions are different on the promo and commercial release. I believe it is the same take on each side, just an extended version on the promo. The up tempo flip "Just You", was another typical Slades release. Notice the previous two releases now have the Domino records address on the label. It was a very good way to be contacted, especially after a hit recording.

The "A" side of this release appears to be "You Must Try."I suspect that both sides were auditioned in radio stations across the country. This is a promo copy, and a stock copy would also have been released. Both sides were strong,and this one is great doo wop! Still in 1959, the Slades released a great dual tempo version of the classic song "Summertime."Many Jocks liked the record, but it was competing with the Sam Cooke version, and on that basis alone, it's much needed airplay and exposure was limited. A couple of exceptions were KNYZ in Houston and KFXM in San Bernadino CA, who rode "Summertime" 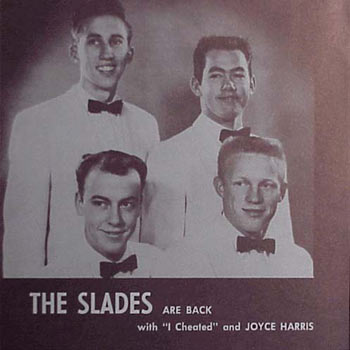 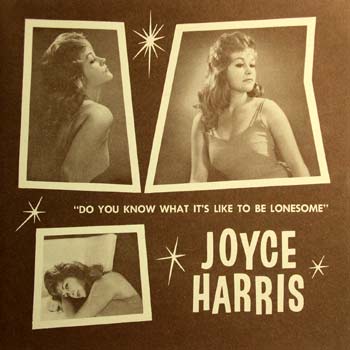 The Slades got yet another promotional picture insert, and they were trying to get back on track with record sales. DJ's may not only have flipped over the record, but also turned over the picture insert. Still, there was no wide regional play. Click the pictures for a view of both sides of the inserts.

Here are the Slades backing up Joyce Harris with "I Cheated", which answered their own record! The current numbering scheme for Domino goes back to the 900 series, and this was released in 1961 This is just Joyce Harris on the flip side with "Do You Know What It's Like To Be Lonesome", without the Slades backing her up. Joyce Harris was best known for "No Way Out", also originally released on Domino 905.The Slades on this record are Don Burch and Tommy Kaspar. See the Domino records label shots for additional information.

"It's Your Turn" released in 1961 and was the last Slades recording I am aware of, and certainly the last Slades disc for Domino. It is an upbeat recording, a bit more pop than previous releases, but fun to listen to. The flip side, "Take My Heart" is close to the typical ballad for the Slades, again with a bit more of a pop sound than most of their other recordings.

Updates: This is a fairly complete listing of Slades recordings in the late 50's and early 1960's, including backup vocals for other artists. The group did well,but were somewhat limited by the distribution of Domino records outside of Texas and a few other regions. You cheated could have done better. Domino's decision to use Los Angeles based Ardco to press and distribute the records, in hindsight,was probably not the best choice. Combine that with the fact that the intentionally similarly named "Shields" cut a very good Version of the song, and had the powerful Dot record label distribute the disc at a national level, and Domino records had rejected an earlier distribution deal from Dot, paved a rough road for the fledgling label. Don Burch passed away in March of 2020. Bobby Doyle passed in 2006.