Colorradio.com - Ted Newman
Must Have Javascript on
For The Slideshow To Work 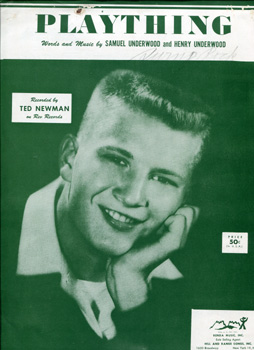 Ted Newman was born in South Dakota on May 6th 1939. He grew up listening to some of the great vocal artists like the Mills Brothers and Nat King Cole. He came from a musical family, and he has continued the tradition, to this day. Ted moved around as he was growing up, and as he was finishing High School, was located in Arizona. He got to know a few of the local people in the music business, and recorded a couple of home town commercials. Almost out of the blue, he got a call to record a brand new song. He waxed it with some of the finest musicians on the west coast, and a record was pressed for distribution. In September of 1957 you probably heard Ted Newman's "Plaything" on your local hit bound sound radio station. The record only peaked at #45, but it did fairly well in many regional markets, namely Philadelphia and Los Angeles. Rev records, part of the Revere record corporation, was based in Phoenix, Arizona. Slated as a pop and country western label, they had more than one rock and roll release to appeal to the younger record buyers. Ted Newman recorded four records, two of which appeared on Rev, the other two on RCA. Newman appeared in many shows on the strength of "Plaything." One of the tours was a six week gig in Texas, and he opened for Johnny Cash. He was also on a show in October of 1957 in Long Beach California produced by the legendary Los Angeles Disc Jockey, Art Laboe. Two appearances on Dick Clark's Bandstand were also in the cards for Ted. All of this while trying going to Arizona State on a football scholarship! Not only did Ted Newman have some great experiences with rock and roll, he finished school, taught school, and eventually started singing cowboy, humorous, and generally fun songs. He has written over 400 tunes, and continues to perform today at every opportunity. Listen to my interview with Ted Newman HERE! It was recorded in spring 2006. 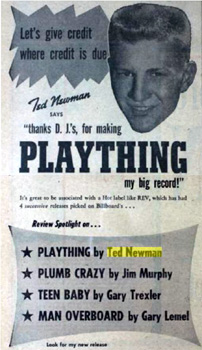 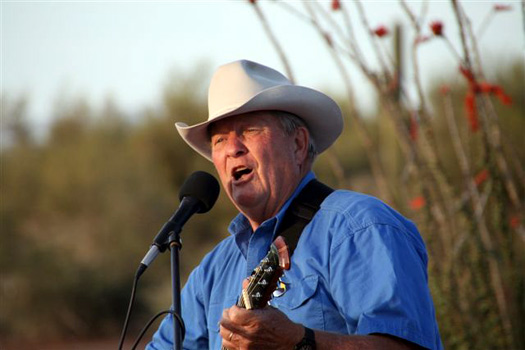 Though issued in the later part of 1957, the 78 RPM was not gone or forgotten. If a record company had the makings of a good sized hit on their hands, they still pressed up a limited quantity of 78's. Besides buyers that still had not converted to the 45 RPM format, there was still a load of jukeboxes that played them, and they were still an important part of promotion. Ted Newman's "Plaything" was the hit side, and though considered rock and roll, it had a pop edge to it. The flipside is "Unlucky Me." Rev records was from Phoenix, Arizona.

Here is the fairly common 45 version of the record. The fifth record release for the fledgling Rev label, they and Ted Newman hit pay dirt with this one. I have always liked the record, and got my first copy from a friend that bought it when he was in the Seattle area. Duane Eddy played guitar on this session, along with Clyde Stacy.

Naturally, Canada pressed up a load of records on the Quality label, to cash in on Plaything. Shown above is the 78 RPM. Not much information on the label, but as in all Quality releases, they used their own numbering system.

The Canadian Quality 45 RPM is shown above. Quality 45's often had stars on them. They normally are on both sides of the records, so they don't indicate the hit side.

Rev records got 6 releases in before issuing Ted Newman's follow-up. "I Double Dare You" is a fun record to listen to, but just didn't catch fire like "Plaything." Notice that a vocal group, the Accents, is listed on the label. Jimmy Wilcox also got label credit for his work. "None Of Your Tears" was the flip. "Tears" in my opinion, seems like it should have been the "A" side. It had some of the similar hooks that Plaything had, and is enjoyable. Most of the same session musicians were on this record.
I had the opportunity to speak with Ruth Elliot. She was one of the original backup singers on Plaything. She remembers meeting Ted Newman at the recording studio in town. Ruth was a vocalist and was singing commercials for all types of products. She worked with Connie Conway, Jimmy Wilcox and Jack Miller. She came from a very musical family; one brother was a member of the Hi-Lo's, and another played Trumpet with Stan Kenton and other big bands. When Ted Newman was about to record Plaything, the studio asked Ruth to provide them with a background group for the disc. The recording was clearly a solo by Ted Newman, but the female voices played a big part in the sound of it. The group Ruth Elliot recruited became a trio which included Ruth, Betty Magnan, and Ruth's neighbor at the time, Jackie Morton. They were dubbed the Playmates, though it did not appear on the record label. The group was only used in the studio, and never sang with Ted on his live shows. The Playmates were actually offered a contract to sing as a trio around town. The contract stipulated that the record company would get 15% off the top of all monies from appearances they made. Since Ruth was already making a living singing, she didn't want to give up the 15%, so she declined the offer. The Playmates sang only on Plaything and the flip, Unlucky Me. The identities of the female vocal group on the second Rev label record by Ted Newman, are unknown. The label just lists the Accents. Ruth Elliot continues to be involved with music to this day. She has played at many well known Phoenix,Arizona clubs including the Westward Ho, and Chez Nous. She currently works with or leads a few different aggregations including a sixteen piece big band.

"It's Hot In Here" is the A side of the first release for RCA by Ted Newman from 1958. Done in a slow "stroll" style, it has Newman doing some Freddy Cannon "whew's", and a sax slightly reminiscent of the diamonds records, except during the break. On the flip, "Why Did You Break My Heart" goes back to the formula with the presence of the girls in the background. Ted Newman signed a one year record deal for RCA, but still recorded these from the Rev studios in Arizona.

Ted Newman with his second and last release for RCA. Based on the matrix numbers, "Brigitte" would be the plug side. An up tempo, pop sort of record with a short decent break in the middle, and a little French at the end. And yes, this song was an ode to Brigitte Bardot! "Hey little Freshman" has Ted Newman back with the girls on an up tempo outing. A slightly hotter break greets us in the middle of the track, on this rockin' teener. Notice that Trinity along with Desert Palms Music has the publishing on all four RCA sides. Released in 1958. 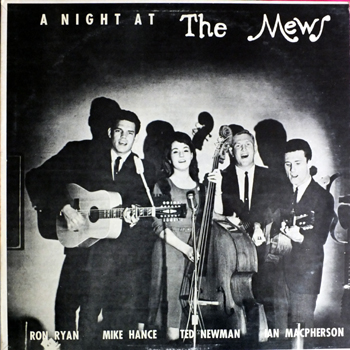 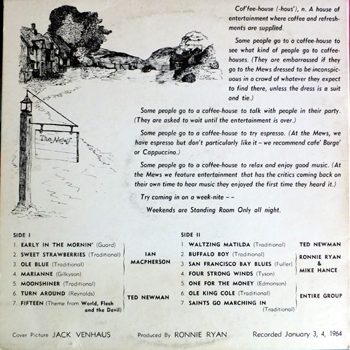 Recorded January 3rd and 4th, 1964, live at the Mews in Scottsdale Arizona, the group on the cover was never exactly identified with a name. The group members were however, identified very distinctly on the front cover and included not only Ted Newman - second from right, but also his brother in law on the far left. Mike (Michelle) Hance and Ian McPherson rounded out the group for this recording. The back cover was a semi-commercial for the Mews, and coffee shops in general at the time. Fourteen songs are on the LP, and it was produced by Ron Ryan.

One of the great things about the LP is that each lead on each track is identified clearly on the LP and back album cover. Ted Newman has cuts five to seven on side one and cut one on side two. The actual issue date would likely be early to mid 1964. I am thinking the record number of 3164 is probably a date code. Click the covers and labels for a better look. 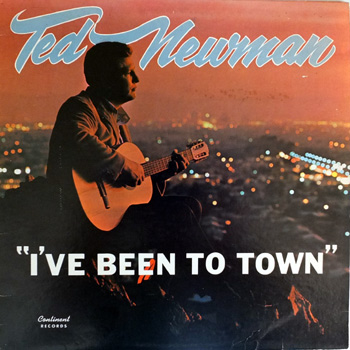 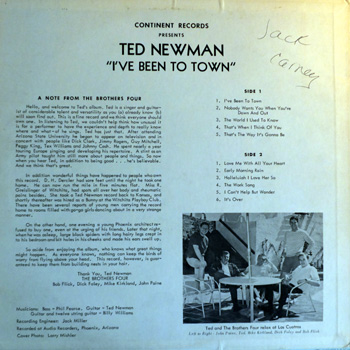 From the 1980's, "I've been To Town is a fine LP from Ted, and he includes some great songs. Besides the title track, "Hallelujah I Love Her So", "Early Morning Rain", "It's Over", and eight others.

These are both sides of the record labels. Continent records is unknown to me, except for this release by Ted Newman. 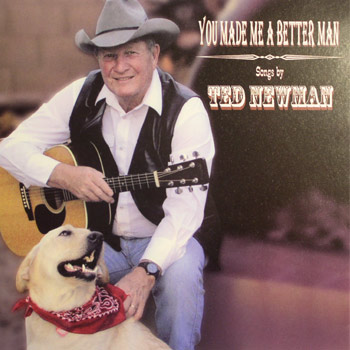 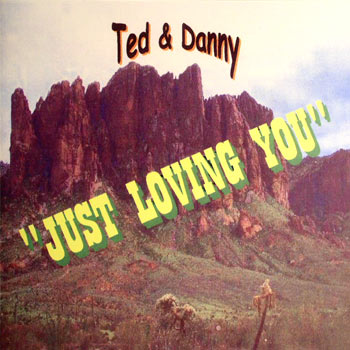 Pictured on the left is Ted's CD entitled "You Made Me A Better Man." Besides the title cut, "Real Cowboys Don't Line Dance", "Jimmy Buffet Doesn't Have You" and my favorite, "Photo Radar" are amongst the fourteen tracks. On the right is Another fine CD, this time with guest artist Danny Shannon, entitled "Just Loving You." Some great guitar work and vocals from Ted And Danny fill out the lucky 13 songs. This CD also includes some great instrumentals. Ted has several other CD's that are not pictured here, including "Songs For Kids." Really cool songs done for kids, both big and little . "Wolf Pack Running Like The Wind" is just one of the great compositions on this disc. Ted writes many of his own songs, and the originality and enjoyment comes through in his presentations. 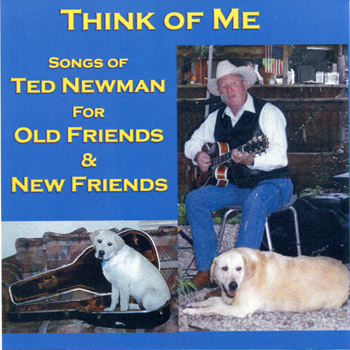 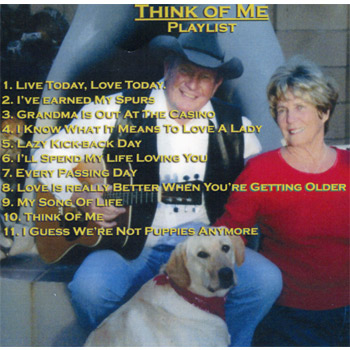