Colorradio.com - Cat Records
Must Have Javascript on
For The Slideshow To Work 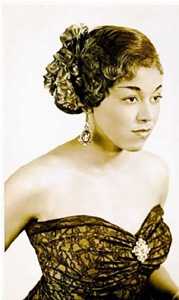 Cat records was a subsidiary of Atlantic records, which was a giant in the R+B field, and in some respects created the outlet. Many of the early groups recorded on Atlantic, like the Cardinals, Diamonds, Clovers, and Drifters. Cat records was formed in 1954 and actually had more single artists than groups through nearly two years and 18 releases. "Cat" was a popular term, and was hip for the day. This new R+B label released some interesting records, all of which were issued on 45 and 78. Some had substantial airplay, others were a blip in time. It makes you wonder if they were trying the same formula as Atlantic. The Chords had the most successful record by far on the Cat label, with "Sh-Boom." Unfortunately, another group had rights to their name, so the Chords went through some name changes in their effort to keep recognized after their huge hit. For more information and great record label pictures, see my page on the Chords HERE. Cat had four different female vocalists, possibly trying to find the next Ruth Brown or Laverne Baker. They had male groups, both pop and R+B, and some fine blues recordings, pretty much the same mix as Atlantic. A wide variety to be sure, what follows on this page is every Cat label release. Just over half feature both 78 and 45 RPM examples. 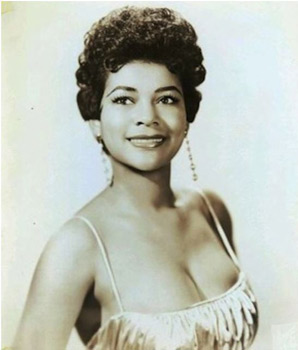 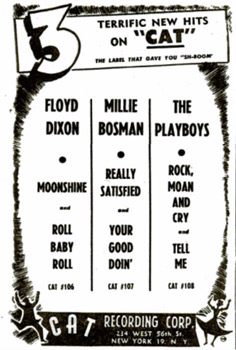 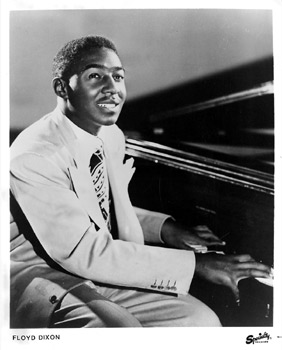 The very first Cat release was Mike Gordon with the El Tempos. "Why Don't You Do Right" and was a standard. On the flip, "You Got To Give" is another bluesey up tempo effort, with a great instrumental break. This was his only Cat label release. He did record for Savoy as Big  Mike in 1955 and used the El Tempos on the session. This was issues in early 1954.

Little Sylvia Vanderpool had Cat's second issue, 102. Sylvia was to shortly become half of the duo Mickey And Sylvia. "Fine Love" backed with the up tempo"Speedy Life", shows her with Mickey Baker and his band. Little Sylvia had first recorded with Hot Lips Page on Columbia records in 1950. This was issued in 1954.

This is the 45 RPM issue. Two decent sides by Sylvia, who would enjoy many duet hits with Mickey Baker, and then on her own in the 1970's and charted high with "Pillow Talk." She recorded more records in her career than many people know about. See my Mickey And Sylvia page HERE.

This is the 78 of the first pairing of Chords' sides."Sh-Boom" backed with the original flip "Cross Over The Bridge." Bridge was supposed to be the "A" side and is indicated as such in the dead wax numbers. Many DJ's started flipping, and Sh-Boom became the monster hit. Notice the Dr. Jive sticker on Sh Boom. He was a legendary DJ in the New York area. This was from April of 1954. See the full Chords label pictures HERE.

This is the 45 version of the original pairing. Notice that the 45 label is a maroon color compared to the flat black 78's. A very colorful design. This pairing lasted for about two months before changes were made. The Chords had the most success of any artist on the Cat label.

Once Sh-Boom became the popular side, Atlantic decided to drop "Cross Over The Bridge" and replaced it with "Little Maiden." The 78 is shown above. Actually, it was Atlantic that wanted more publishing money, and no doubt it helped the DJ's concentrate on Sh-Boom and not flipping the record over. Issued in June of 1954.

The lovely maroon cat label 45 version has the same information as the Cat 78. As for the new "B" side, it was not a particularly good recording. It was a great way to get Sh-Boom played, not that they needed much help by then. This is the most common release of Sh-Boom.

Although not the next record issued in the time line of the Chords recording career, this was the result of another Chords group being discovered. That required them to change their name, and they picked the Chordcats. When name change was official, they issued "Sh Boom" and "Little Maiden" using the same label and record number. The name association was a very tough obstacle, so it didn't sell real well.

The maroon cat 45 of the Chordcats is shown above. The label information is identical to the 78. This would have been re-released in September or October of 1954.

Prince Patridge was next in the Cat records discography with"Cooperation Part One" and "Cooperation Part Two." More of a novelty record, it sold fairly well for a short time. Patridge continued to make a few Novelty records like "How Come My Dog Don't Bark" for Crest. Issued in June 1954.
c

The 45 RPM version of "Cooperation." The Monroe Tucker orchestra was used by Cat on this record number 105. There was also an issue of this record on the Blaze label, which is likely a reissue. Billboard called this "The Funniest Record Of The Year" in their July 10th ,1954 edition. Anybody know exactly who he was?

The first of two records by Floyd Dixon on cat, " Moonshine" flipped with "Roll Baby Roll." Dixon was a prolific recording artist and started waxing discs around 1950 for Aladdin. Both sides of this recording are good. Issued in August 1954.

Millie Bosman had one record for cat. "Really Satisfied" was the plug side and "Your Good Doin" was on the back. This was reviewed along with the previous record, in Billboard, on August 21st, 1954. She was shown associated with Beacon records in 1952, and MGM in 1953.

Also from August 1953, this newly signed group by Cat called the Playboys, had two records for the label. "Rock, Moan and Cry" and "Tell Me" was their first pairing. Lincoln Chase was the writer on the plug side. Charlie White was a key member  of note with this group. He recorded with the Dominoes, Checkers, Tenderfoots and the Clovers.

The next numbered release was on Cat 109, and was by the Chords, titled "Zippity Zum." Released in September 1954, it has two fine recordings, with "Bless You" on the flip. It was rated high in the reviews (88), but did not compare in volume to Sh-Boom. The 78 is shown above from 1954.

On the 45 RPM version, everything is pretty much the same. The label has the exact information as the 78. The Chords never regained the success of "Sh Boom."By October 6th 1954, this was hot in Los Angeles, shown as a territorial tip from a Billboard R+B survey.

Staying on Cat 109, but fairly close to the time line, the name is changed to the Chordcats for this 78. Shortly after the original release of Cat 109 by the Chords, the group name controversy occurred, and the Chordcats name was chosen. The record company decided to reissue both of the Chords records on the same label and number, but by the Chordcats. Whew!

From December of 1954, the Collegians had one release on Cat, the pop sounding "Rickety Tickety Melody", backed with "The Sackbutt, Psaltery And The Dulcimer." The "A" side was obvious from the titles.

The 45 RPM version. The Sid Bass Orchestra was heard on both sides of the record. This Collegians may have been the same group on Groove in 1956. This is a very pop oriented recording. Was Atlantic / Cat looking for the Four Preps sound? Billboard had a very nice write up for the Collegians, but still only rated the songs 74/73.

Rose Marie McCoy was on Cat 111, and "Dippin In My Business" was released in 1954. "Down Here" was on the flipside. Both sides written by her and Charlie Singleton. They also teamed up to write "If I May" which was a hit for Nat King Cole for the Capitol label in 1955.

From Late 1954, and now doing business "Officially" as the Chordcats, the 78 shown above has "A Girl To Love" as the plug side. "Hold Me Baby" was the flip. This is an unusual promotional copy on an all white label. I figure they needed to send this out to the radio stations to drive home the fact that the name change was in effect.

This is the regular stock copy of Cat 112. We will see the group re-invent their name again later on as as the Sh Booms.

Here's the 45 RPM version of the Cat 112. Both decent songs, and they should have sold better than they did. Besides dealing with the name change, their previous record did not sell well, so this was tough to get off the ground.

From early 1955, Ernie Scott And Warren Oakes had airplay with this release on the Alan Freed show. They were a Black/White duo which was very unusual in 1955, just as racially integrated groups were. According to daughter Wendy Oakes, they cancelled a tour to Las Vegas, and did not record a follow-up record for various reasons, including issues that arose with a bi-racial act in the mid 1950's. "Tick Tock" made it into Freed's playlist and countdown. It was the same song that Marvin And Johnny recorded but done in a very popish style. "It Was You" appeared on the flipside. A pop ballad that might just put a rock and roller to sleep. Scott And Oaks never did want to record the song, but the label insisted. The black label 78 is shown.

The 45 RPM is shown above. I don't show any additional releases by the duo, on any other label. They only recorded this one record, and quit the music business. It only rated a 69 on Billboard, which did not help their cause. Released in 1955.

Floyd Dixon is back for his second Cat label recording. "Hey Bartender" was the "A" side and got some great spins for him. A great bluesy rendition of the song, it's a winner. "Is It True" is on the back.

The 45 RPM version of the pairing. It looks like his next recording stops were at the Los Angeles based Cash and Ebb labels. With an 82 and 85 respectively, he was in the upper echelon of Billboard reviews.

The Playboys are back for their last issue, on Cat 115, from April 1955. "Good Golly Miss Molly" was a rocking tune that was completely different then the Little Richard record you might have been thinking of. "Honey Bun" was on the flip.

Another vocal group effort, this time by the Sheiks. "Walk That Walk" was backed with "The Kissing Song." The Sheiks may have also been the Ef N De label group that recorded "Give Me Another Chance", but not the Federal group that had the original recording of "So Fine."

The 45 on the maroon cat label. I like both sides on this great vocal group record. Both sides have nice breaks in the middle. Too bad this didn't get more exposure.

Cat 117 was released in October of 1955, a rather long wait between the Chords / Chordcats releases for Cat. One reason could be that there was another new name for the Chords/Chordcats - The Sh Booms. The 78 is shown above. "Could It Be" was the "A" side and "Pretty Wild" was the up tempo"B" side.

The 45 RPM release again used the same information. You can see at the bottom of both the 78 and 45 RPM records, the reference to (Formerly The Chords). Never even a mention of the Chordcats.

Margie Day was the last artist to record for Cat records. "Ho Ho" was deemed the plug side and "Pitty Pat Band" was on the flip. Margie recorded for many labels, most notably Dot. You could also find her on Deluxe, Decca and later on, Legrand - Home of Gary US Bonds.