Colorradio.com - The Pixies Three
Must Have Javascript on
For The Slideshow To Work 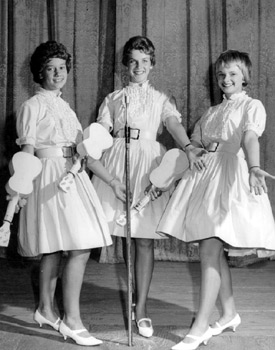 The Pixies Three, shown (Below right) left to right are Kaye McCool (Krebs), Debbie Swisher, and Midge Bollinger, taken in 1963. From Hanover, PA, they started out as the K-D-Dids, which included Debbie and Kaye. They sang for the neighbors, inviting them to their breezeway and charging just two cents for a show. They won $15 at a local talent show, and the K-D-Dids dreams became bigger. Around 1958, they decided to add another member to the group. They searched the neighborhood and found Midge a ready and willing participant. The K-D-Mids were born! Unfortunately, the name was not so popular, so they changed it again to the Pixies, after the popular haircut. The Pixies started entering every talent contest they could find. Elk clubs, rotary clubs, carnivals and local fairs hosted the trio, and they came away winners quite often. They also performed on the Ted Mack show and the Tony Grant "Stars Of Tomorrow" (right - Steel Pier)) contest - these girls got around! And when they got down to the Venus Lounge in Philadelphia, the record producing team of John Madera and David White spotted them performing and asked the Pixies to give them a call so they could make a record. When they finally hooked up, their name was changed to the Pixies Three because of a conflict with a different Pixies group from Washington DC. They signed with Mercury records and "Birthday Party" was headed up the charts. It turned into a big seller, so they waxed 442 Glenwood Avenue with Cold Cold Winter. Both sides parked on the charts, and the Pixies Three were off and running. They cut six 45's and one LP in their early 60's blitz on the eager record buying public, and had incredible popularity both here and Internationally. The Pixies Three reunited in 1991, and have been singing at various oldies functions ever since. I had the pleasure of interviewing Kaye Krebs in July of 2006. Listen the the interview HERE! It was recorded on July 4, 2006. Take a moment to visit them at http://www.thepixiesthree.com. 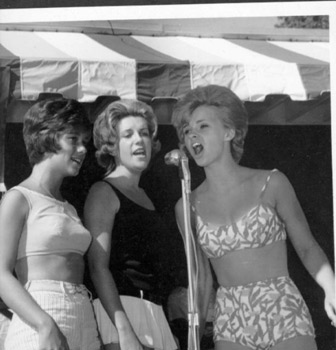 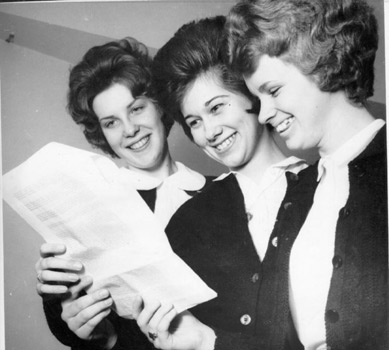 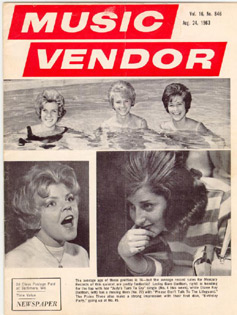 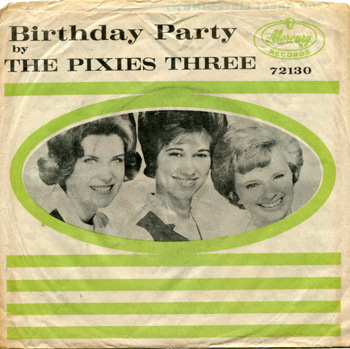 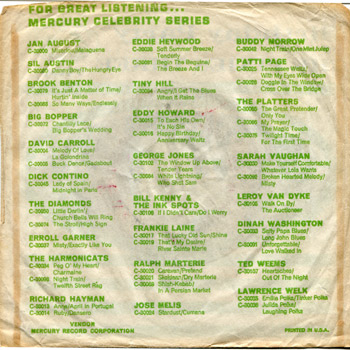 The Pixies Three first release had a sleeve, as did most of their records. I think adding a picture of the group, helped to associate the great girl group sound with the lovely faces of the girls. It also set the style of many of their sleeves to come. Picture sleeves were often issued by the record companies to give their artists additional exposure, and I believe it helped sell the records.

Picture sleeves may have helped to sell records, but I'm not so sure the Pixies Three needed it! "Birthday Party" debuted on the Billboard charts on August 17, 1963, and soon bolted to number 40 nationally. It lasted nine weeks on the charts, and was a great first recording by the girls. After hearing the record, who wouldn't want to go to a birthday party? "Our Love" was on the "B" side. This is a record that should have charted higher than it did, because it seemed to peak in different regions at different times. For example, this was number one in Baltimore, some cities in Florida, and the New England states. It peaked in Detroit early, and Los Angeles, a bit later. 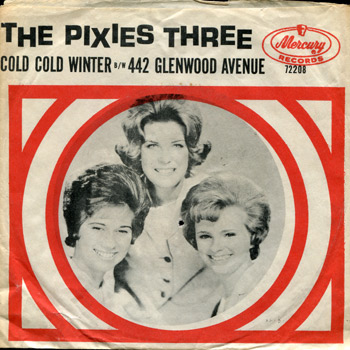 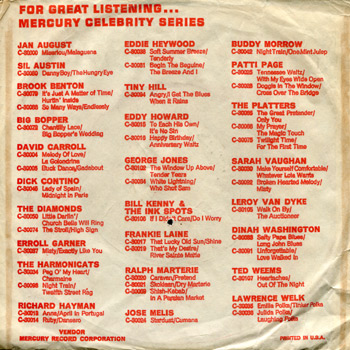 The next sleeve changed from the green background to red. The picture is a different pose, larger, and even more appealing then the first one. Cold Cold Winter and 442 Glenwood Avenue were the sides on this disc.

The Pixies Three's second release for the Mercury label was a two sided smash for the trio. Recorded at the famous Mira Sound studios in New York, "Cold Cold Winter" was the first of two records that navigated Billboard in January of 1964. The DJ's flipped it and "442 Glenwood Avenue" would be the bigger side, peaking at number 56 on the Billboard charts and lasting for 7 weeks. Combine that with the 5 weeks that Cold Cold Winter charted, and you start to realize just how big the record was. Had the Billboard tabulations been used differently by accounting for the two sides both being hits and adding the sales together, this record would easily have been in the top 10. Both of these sides also made it to the top position in several local and regional charts. 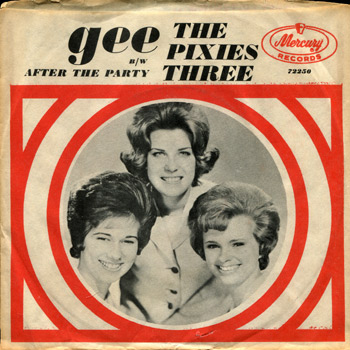 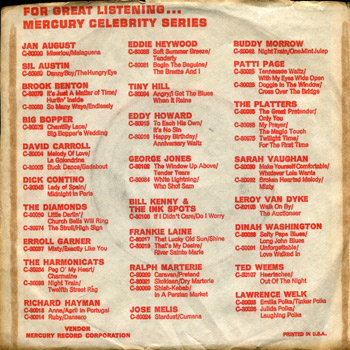 Staying with red, and the same picture, a sleeve was sent out with the Pixies Three next release for Mercury called Gee. After The Party is shown as the flip/ The reverse side just has a listing of other popular records on the Mercury label.

Time for another chart hit for the Pixies Three! "Gee" was a fine remake of the Crows record from 1953. It was performed in an up tempo manner like the original, but it had the added charm of being the "Pixies Three." This one entered the charts in April of 1964. It peaked at number 87 - not bad when your going head to head with the British Invasion groups - but again, was a record that made it into the top 20 and top 10 in many regional charts. This single was pulled from their newly released LP called Party With The Pixies Three. Also from the party themed album, "After The Party" was on the flip. A fine slow ballad that has a great story. On this recording, the Pixies Three added Bonnie Long, due to the departure of Midge. Debbie became the lead singer, and Bonnie took Debbie's part of singing high. 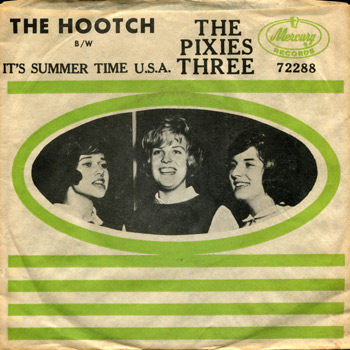 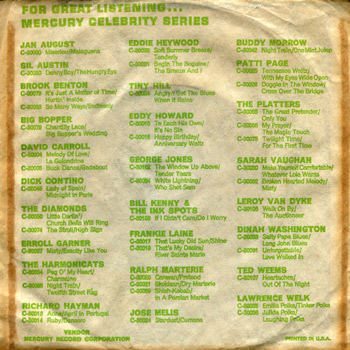 Using the green color on the Hootch, there was also a new picture added. This was really a good two sider that should have had more air play than it did.

Up next, it was "The Hootch." Or, maybe not. It was a new dance, but many of the music directors and industry professionals felt it had another meaning. Perception is king, so Mercury rushed some trade ads that claimed the DJ's were playing the wrong side. Heck, "Summertime USA" is a great record, and with hindsight being 20/20, maybe it should have been the plug side. Regardless, both sides were fun. The incident pretty much took it away from any chance of extensive Billboard chart action. Summertime USA actually did get on the Billboard bubbling under charts at #116. This pairing was released in June of 1964.

The Pixies Three next to last release was called "Orphan Boy." They were trying to get a Phil Spector type sound when they were recording this in the studio. It was certainly a different theme, but when you competing against the Beatles and the other invasion groups, you had to try different things to see what might work. "Love Walked In" is a very pleasing "B" side that was a good companion record. The promotional copy is shown, and was released in 1965.

The final issue for the Pixies Three was "Love Me, Love Me." It's a nice up tempo record for the girls. On the flip, it's "Your Way", and I like it just as well. The year was 1964, Madera And White continued as the producers up until the end. 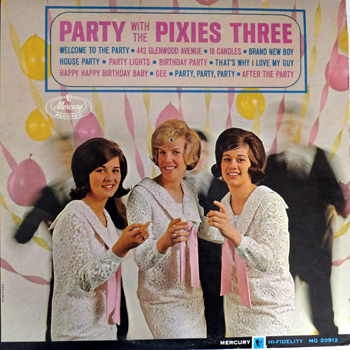 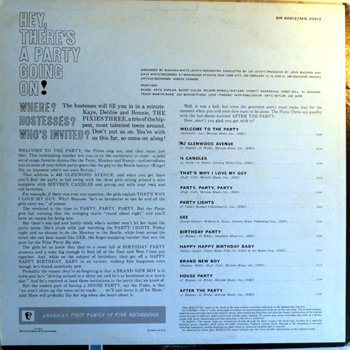 The Pixies Three made on LP and it was issued in 1964. It is a party themed record called, appropriately, Party With The Pixies Three! Many of the songs had "Party" in the title, and as mentioned earlier, their third single called "Gee" was taken from this disc. The Pixies Three had some great musicians on this one, including Vinnie Bell, Leon Huff, and Trade Martin. Madera-White produced and arranged it, as usual. The mono covers are shown above.

These are the two LP labels. A total of twelve songs, which was very standard for rock and roll LP's at the time.
Updates: The Pixies Three had a great, but short recording career. In spite of having records on the charts for just a couple of years, they were extremely popular, and a really hot act to see in the early to mid 1960's. They had just one personnel change during that time, and worked with some amazing musicians on their records. They were fortunate to be guided by one of the most in demand producing teams of John Madera and David White, who worked with them all the way. They created a sound, and then an LP after just two 45 RPM releases. The Pixies Three were on the playlist of every top 40 station across this country and abroad. They contended with the British Invasion, and that may have been the ultimate demise of the group in 1965. They were in good company, as very few groups and artists that were not British found little chart action, but still sounded great. The Pixies Three also have several CD's and pictures available on their website, as well as more in depth history and pictures. Where are they now? Coming to a concert hall near you! The Pixies Three reunited in 1991 with Bonnie, Kaye and Debbie. In 2000, Midge re-joined the group as Debbie left to pursue other interests. They continue to perform at oldies shows, mostly on the east coast, where they are located. They all have other jobs and responsibilities, so they have a limited schedule. If you are fortunate enough to see them live, get ready to be entertained. They've still got it!