Colorradio.com - The Ravens 46-49
Must Have Javascript on
For The Slideshow To Work 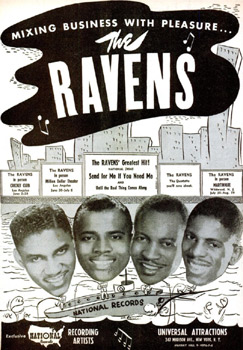 Jimmy Ricks and the Ravens had a long and successful career, starting in the mid 1940's. This page focuses on the Hub and King label recordings, that were only issued on 78's. Several flip side differences and re-recorded versions were produced. The Hub recordings were basically re-sung at King, and sometimes paired with an instrumental. Hub records, based on Fifth Street in New York, had nearly 30 releases before the Ravens discs. Most were gospel and blues related efforts. King as such, was relativity new at the time, and the first Ravens release was about 50 issues into the King label logo. Before King, it had been Queen records, and some of the later queen 78's were also issued on King. The Ravens were not doo wop, but some of the early beginnings of R+B for sure. When you think about the early groups, there are several, but your list should contain the Ravens. 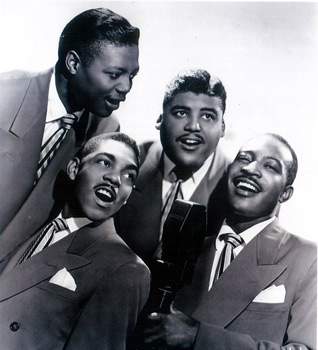 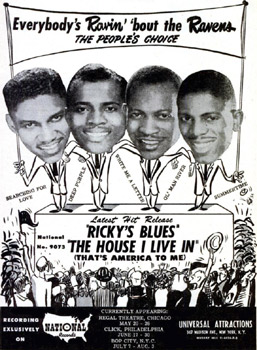 The first record label for the Ravens was Hub based in New York on Fifth Avenue. "Honey" was released in 1946, and was their first recording. "Lullaby" was on the flip.

"Out Of A Dream" was actually the next issue for Hub and the Ravens, since 3031 appears unissued. My favorite is the "B" side, "My Sugar Is So Refined." A great song and Jimmy Ricks sounds like he was having fun. It was quite popular at their live shows, especially when Ricks part of the lead came up.

This is the final Hub release for the Ravens, and the next sequential issue for Hub. Still in 1946, the first version of both "Bye Bye Baby Blues" and "Once And For All" was recorded.

This Hub label release also appears on the red label, the only Ravens Hub record that did. All the text and information is essentially the same, just a color difference. I have seen some jazz issues in the 2020 range that were also pressed with red paper, and there is a Hub records from Hollywood that was red in color.

Jump to 1948. The Ravens are now on King, and the exact pairing of the last Hub release is tried for their new label. The songs were re-recorded and issued as King 4234. "Bye Bye Baby Blues" and "Once And For All."

King must have decided to promote the Ravens "Bye Bye Baby Blues." They reissued it with an instrumental on the flip called "Song Of India" by the Herman Chittison Trio"

Next in line for the Ravens on King was "Out Of A Dream" This was issued in 1948, and the Three Clouds were on the flip with "Blues In The Clouds." This is the first of three Ravens 78's with the Three Clouds on the "B" side. Apparently, there were not enough sides available or they were stretching out the ones they had to keep pushing the product.

Based on the previous formula, King took the first Hub song called "Honey" re-recorded it and issued it with a non Ravens flip. The Three Clouds instrumental called "Matinee Hour In New Orleans" was the "B" side, from 1949.