Colorradio.com - Ronnie Haig
Must Have Javascript on
For The Slideshow To Work 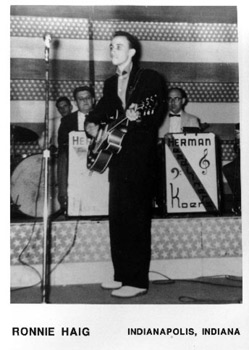 Ronnie Haig was born in Indianapolis, Indiana on March 21, 1939. He listened to a lot of the country superstars early on, but eventually settled on something different. In the photo to the bottom left, he was in a high school doo wop group called the Twilighters, and had a good local audience. He never did leave his doo wop roots, as he did record some great harmony sides on vinyl, including working with the Five Stars and the Students. His first guitar was a Gibson ES295 Gold, purchased in 1957, and still in use by him today. His biggest hit with Ronnie Haig listed as the solo artist was "Don't You Hear Me Calling Baby" released on the Indianapolis based Note label, owned by Jerry and Mel Herman. It had good action in the Midwest and was leased to ABC (Hunt). Indy DJ Bouncin Bill Baker was the first DJ to play Ronnie's record. He played on many other sessions with other fabulous artists, and has played some great shows through the years, including Bandstand. Ronnie is still making music today, though he doesn't do much live performing due to health issues. He has recorded some CD's over the years, and can be contacted at backporchpicker@aol.com. His musical contributions will continue to live on. Listen to my 2004 interview with Ronnie Haig Here! 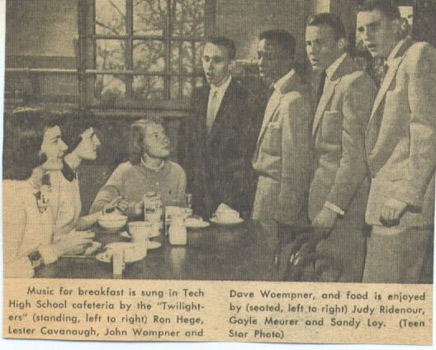 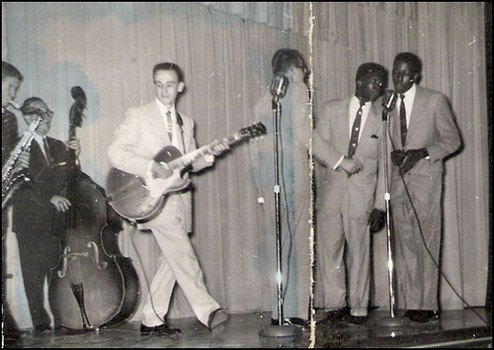 Ronnie had his first "solo" release on Note records in 1958. It was released on the Indianapolis based Note record label. "Don't You Hear Me Calling Baby" is a great rock and roll side that got a ton of airplay in the Midwest, east coast and especially Pittsburgh. The song was about trying to get in touch with his girlfriend at the time, India Roberts. The flip, "Traveler Of Love" is much more of a doo wop side and is very respectable. The Five Stars provided vocal group back up on both sides. Released March of 1958.

As "Don't You Hear Me Calling Baby" started getting considerable airplay, ABC Paramount picked up the disc for National distribution. Above, the promotional version is shown. Notice that both songs were written by Ronnie Haig (Hege).

Here is the stock issue. The right and left side record information is moved back up to the middle portion after being dropped down on the promo.

Though not the next release by Ronnie in sequential order, ABC re-released the same take of "Don't You Hear Me Calling Baby", on issue 10209 in April of 1961. It was apparently an International release for overseas distribution. Shown is a promotional copy.

Here is the same issue as the regular stock copy. It seems fairly unusual for a record company to release the same record a second time with a different number, 3 years after the hit, but it must have sold well in International markets and gave Ronnie Haig additional exposure.

Chronologically, the next release for Ronnie came out again on Note records. "Rockin With The Rhythm And Blues" was another good rocker, and the flip is "Money Is A Thing Of The Past." The session was done in May of 1958, and released about July of that year. This was the last vintage release showing Ronnie Haig as the single artist on the label.

Just before "Rockin With The Rhythm And Blues", Ronnie Haig played guitar on two sessions with Jimmy Coe and the band called the Cohorts. Jimmy Coe played sax, and Ronnie Haig was on guitar. The session took place on Mother's day, 1958, and would have been issued in June or July of that year. The vocal group the Students were the ones yelling "Wazoo" in the background. It was shown as written by Jerry Herman, but according to Ronnie Haig, he and Jimmy Coe actually wrote it. The flip was another great instrumental called "Shuffle Stroll." Unlike a few of the other Note label releases, this one was never picked up by a bigger label for distribution. A great two sided instrumental, it should have broken out for more spins across the country.

Ronnie Haig participated on several notable sessions with other groups. The Five Stars was one of those groups. Their biggest hit was "Pickin On The Wrong Chicken" backed with "Dreaming." Haig is playing Guitar for the Five Stars, returning the favor as they backed him up on his first recordings. This is the original Note label release. The Five stars had a previous recording on the Kentucky based Kernal records. This issue is from March of 1958.

The Note issue was picked up by Hunt, a division of Globe and part of the ABC family. It certainly was afforded better distribution and was definitely on it's way to hit status. Rumor has it that the group tried to charge excessive amounts for their shows, and the record slowly died. It was also shown issued on ABC 9911. The Hunt label DJ copy is shown.

This is the stock copy. Interesting that the regular releases were very similar to the promotional copies. All the information on the labels remain the same.

Ronnie went back to the studio to cut his 2nd release "Rocking With The Rhythm And Blues" (Shown earlier), and at the same session, backed the Students on a great Two sided effort. "I'm So Young" and "Everyday Of The Week" was the pairing, and it was originally released on Note Records, shown above. It was quickly picked up by the Chess subsidiary, Checker records for wide-spread distribution (Below). You can hear the great intro of Ronnie Haig on Everyday Of The Week, as he sets the tone for the record. The Note label still pressed records for Distribution in Indiana and Ohio, Checker distributed for the other states. Released in 1958.

Shown above is the Checker promotional copy from August of 1958. Jimmy Coe was involved with the disc and got credit for arranging and conducting.

Here is the stock maroon label checker issue that most people had. The word Checker is vertical, which is original for this release. When the Checker label first started, there was a web design at the top.

Ronnie Haig was playing guitar again on the next Five Stars Record, "My Paradise" And "Friction." This was also issued in the July/August time frame of 1958. The Note label was used again, but this time, it was not released on Hunt or ABC. 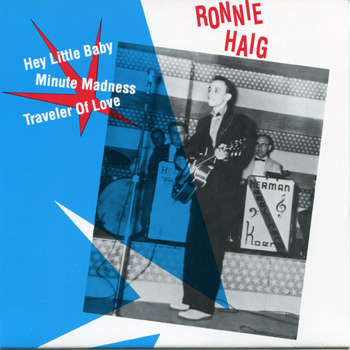 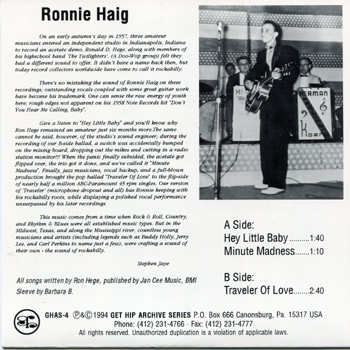 From the fine folks at Get Hip records, this EP has two songs on the flip, one on the side showing. A great picture of Ronnie Haig on the cover,and some history on the back cover. This was issued in 1994.

Here are both labels for the get hip release. "Minute Madness" on side A was an attempt at the B side song, but the engineer must have had a rough day and flipped the wrong switch in the middle of the recording.

Here is an issue on the Silverball label from late 1992. It is one of four records they put out by Ronnie Haig, that were unreleased vintage recordings. Some were colored vinyl, others black wax. "Open House" and Unforgotten Love" are shown, with the "A" side signed by the artist.

Another issue for the Silverball label, "Mucho Fine" is a great mid tempo rocker from Ronnie, and is the "A" side for this record. "Go On,Go On" is the flip. Both were originally recorded, but not released, in 1961. This 1994 release 33 years after the fact, was on gold vinyl.

This is Ronnie Haig with "Pork's Chop Boogie." Both sides are the same on this promotional release for Silverball. copies were pressed on White (300 pressed) and Pink vinyl (200 pressed). This is an instrumental with some smoking Ronnie Haig guitar, and really worth hearing.