Colorradio.com - The Elgins
Must Have Javascript on
For The Slideshow To Work 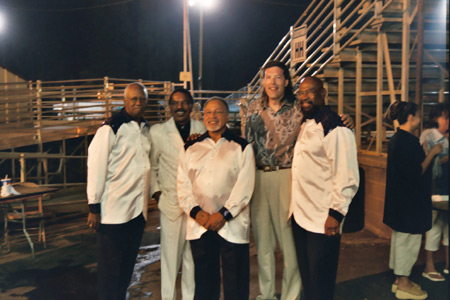 Here I am with the Elgins at the Nevada County Fair in August 2003. From left to right: Russell Parker, William DeVase, Jimmy Smith, Myself, and Darryl (Cappy) Lewis. The Elgins history goes back to the 6 Teens who hit big with "A Casual Look."Darryl Lewis was a part of that group along with Kenny Sinclair. Unfortunately, we lost Kenny just prior to this performance. Along with the Elgins, also known as the Elements, he had been singing with the Olympics for just over 30 years. Uncle Sam's Man was one of several decent sized hits the Elgins had in the late 1950's and early 1960's. Other songs included "I Lost My Love In The Big City", Lonely Hearts Club and Your Lovely Ways. Listen to my Interview with the Elgins HERE! It was recorded in the summer of 2003. 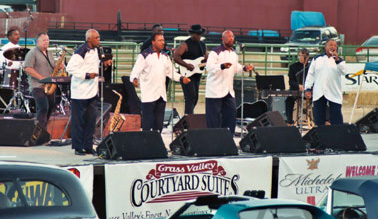 The Elgins were the first of four acts to sing in the outdoor arena at the Nevada County Fair. The show was set up as a drive-in and the classic cars are parked right in front of the stage. It was well attended and was very enjoyable. The other artists performing that night were Rosie And The Originals, The Olympics, and Vel Omarr. They all put on great shows, and all performed in Nevada County for the first time ever. Vel Omarr can sound a lot like Sam Cooke, and has an incredible voice. The Olympics had a high energy show singing their hits, and Rosie nailed her songs, sounding just about like her records did. The show lasted over two hours, and a meet and great followed with all the groups signing autographs.

"Uncle Sam's Man" was a decent hit for the Elgins. It was released by the Los Angeles based Flip Records in 1960, and had great airplay on the west coast. It was written by Darryl Lewis, and you can find it with big print, small print and a white promotional label. "Casey Cop" was on the back and is a fun record. Flip records was another strong independent label that coincidently hosted the 6 Teens. They were also home to Donald Woods, Richard Berry, the Flippers, and many many others. The label wound down operations in 1963, with the exception of a couple reissues on the 1000 series.

"Extra Extra" was released on the Los Angeles Titan record label in 1961. Darryl Lewis once again had writing credits along with Delores Nance. Delores Nance was also responsible for helping to write Endless Sleep. This record was actually released with two flips. Or was it? The first was titled "My Illness", but I imagine the title was a little harsh for the record buying public. Oscar McDonald and Jimmie Smith autographed this record shown above. Seems they did a lot of signing on their Titan 45's. Both songs are very nice ballads.

Apparently My Illness was harsh enough that they re-titled it "Heartache,Heartbreak."It was the same song, take and master numbers. As mentioned earlier, the Elgins were also the Elements, and recorded this "one" record with the two different flips for Titan. Both are great ballads and worth listening to.

This is actually the second release by the Elgins on the Lummtone label. "You Got Your Magnet On Me Baby" and "Johnny I'm Sorry" were released in 1962. "Magnet" is a bit uptempo for the Elgins and very good. The flip."Johnny I'm Sorry" is a story about the girl who will not be there for Johnny when he comes home from the service. Sounds like a female lead on that, maybe Barbara Lewis, who was on "Finally." Nice two sided effort from the Elgins.

Just a great record. "I Lost My Love In The Big City" was released in 1963. It was a hit on the west coast, and it's very surprising that it didn't sell more copies. I suspect Lummtone's lack of good distribution was part of the problem. They may just not have promoted it like it should have been. It was too good not to be heard on more stations. "Finally" appears for the second time, as it originally was issued on Lummtone 109. A great ballad making this a wonderful two sider.

Here is a rather odd release by the "Daniels." It is really the Elgins with their songs "I Lost My Love In The Big City" and "Finally", and this disc was released in 1966 on the Lantam label. I have not seen any other releases for this label, and it appears to be out of Philadelphia. Holton records from New York was the distributor.