Colorradio.com - The Sevilles
Must Have Javascript on
For The Slideshow To Work 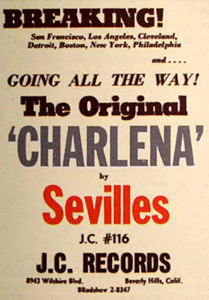 Ohhhhh Charlena!  Ernest Hamilton, Bobby Baker, James Spencer, Charles Smith, And Leroy Hicks comprised the Sevilles. Other members including Charles Wright may also have been in the group. The core of the group had been the Paramounts on Jake Porter’s Combo records,  and recorded “Take My Heart” backed with “Thunderbird Baby” .  It didn’t sell and was their only release for Combo as the Paramounts. They had their start in Watts, which was a suburb of Los Angeles.  Many great vocal groups and artists came from Watts like Etta James,Hollywood Flames,Native Boys and many more.  The Sevilles sang  many of the great hits from a wealth of local Los Angeles artists.  They recorded for Seville records, shown on the label as Beverly Hills, Ca. and owned by John Marascalco. Cliff Goldsmith was the manager for the Sevilles and was also a writer. Goldsmith was also involved with Genie records of Los Angeles. I can account for eight releases on the JC 100 series, with many numbers apparently not used. The 1000 series is a different label, based in Louisiana. The Sevilles may have been a one hit wonder, but they had some great songs in their brief career. It should also be noted that the Sevilles with the Chick Morris Five on the Vagabond label (Cruising) is a different group entirely.

This is first release by the Sevilles from late 1960, early 1961. "Charlena" hit the Billboard Top 100 and peaked at number 84. It is a great song that was played a lot in the Los Angeles area, and has been revived and performed by many other artists. It also was featured in at least one movie. The song “Charlena” was written by Manny Chavez and Sonny Chaney of the Jaguars, but they were never able to convince anyone that they should have recorded it. Their song Piccadilly had a similar sound to Charlena. The flip, "Loving You(Is My Desire)" was a great Doo Wop ballad. A fine two sider for the group. Shown above is the blue label promo. I have not yet seen a white label promo on this record.

Here is the much more common stock issue of Charlena on JC 116. It stayed a total of five weeks on the billboard charts, and as mentioned got a lot of play in the Los Angeles area, though other stations like WIBG in Philadelphia and powerhouse WABC in New York, were both on it. One of the first stations to play It was KYA In San Francisco as a Pick Hit Of The Week on November 14th 1960. KRLA and KACY were also early adopters of the song. Sevilles member Ernest Hamilton is shown as the writer on the flip, "Loving You"(Is My Desire).

Following up Charlena, was a song called "Louella" Though clearly shown as the "B" side to the record, it was the song that was supposed to get the spins. The promo is shown above, complete with the red x's pointing to the hot side. Sometimes, distributors would put stickers on the labels saying "Thanks" or "Play This Side." Salt Mine was another one written by Manny Chavez and Sonny Chaney of the Jaguars.

Here is the blue label stock copy of "Louella" Though the "side" was supposed to be "Louella", no change in the label number occurred. They probably pressed both the promos and stock copies at the same time, so there was no chance to change it. The record did not take off like Charlena but was still a fun song. In fact, there is a reference to Charlena in the lyrics of "Louella."

This is the last release by the Sevilles on the JC label. "Fat Sally" was a novelty rocker that was written by Kent Harris. He is the same person that was with Crest records as part of Boogaloo & His Gallant Crew. The flip is "Working Hard" which is not the same record as the Olympics record, but has a few similarities. This record and the previous one, are both produced by (Fred)Smith And manager Cliff Goldsmith, who also did some work for the Olympics. 1961

The Sevilles switched to the Cal-Gold label in 1962. Cal Gold seemed to have just this release, one by the Three Friends and one by Judy Jaynes. "Don't You Know I Care part one" was a party record, and was likely done at the same session and take. The two sides combined were around 5 minutes- too long for one side of a 45 if you wanted airplay at the time. They simply cut it in half and put it on both sides. Don't You Know I Care part two is the flip. The title seems to have been taken from Charlena, but didn't receive much airplay.

The Sevilles had a small layoff, and in 1964 recorded for the Galaxy label. With "Hey Hey Baby", the Sevilles went right back into the party mode they left with their Cal Gold release. It's just great up tempo rock and roll. The flip "Treat You Right" is a mid-tempo outing that is quite enjoyable and could have been a hit under the right circumstances.

After the first Galaxy release for the Sevilles, Galaxy decided to re-release the Sevilles first hit Charlena, with the original flip. This was not a re-record, but the originall version. Shown is the promo release.

This is the green label stock issue on Galaxy. It did not appear to get many spins on the radio, but it certainly did on this previous owners turntable.