Colorradio.com - Kenny Ambrose
Must Have Javascript on
For The Slideshow To Work 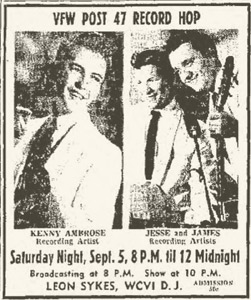 I don't know a lot about Kenny Ambrose. I do know he was from the Pittsburgh area (Duquesne), and sang at many of the local venues. He also first recorded for Hamilton records, and then for the Willett label of PA. To the right, is a newspaper ad promoting Kenny Ambrose at a local record hop at the VW Post 47, and broadcasting it on WCVI with DJ Leon Sykes. And hey, 50 cents for admission! Also pictured is the duo Jesse And James. I believe that is the same duo that recorded "G.I Rock" and "Number Please" for Epic records in 1959. On the left, below, is the promotional picture that was used while he was recording for Hamilton/Dot records. On the right is a picture of Kenny with Kathy Zee. 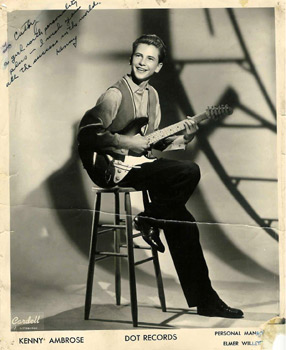 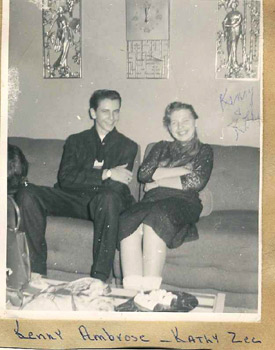 Here is the first release for Kenny Ambrose. "Come On And Marry Me" was issued in 1958. "Don't Be A Fool For Love" was the flip. They were released on the Hamilton label, which was a subsidiary of the huge Dot label. There were actually several groups that recorded for Hamilton,

Here is the Second of two releases that I am aware of for Kenny Ambrose as a single artist. This is on Elmer Willett's Willett label out of McKeesport, PA. "Your Love Is My Love" was recorded in 1959, and was the "A" side. The driving up tempo flip was "Won't You (Love Me Baby)." Two good sides from Kenny Ambrose, and they included a group on the recordings.