Colorradio.com - Johnnie And Joe
Must Have Javascript on
For The Slideshow To Work 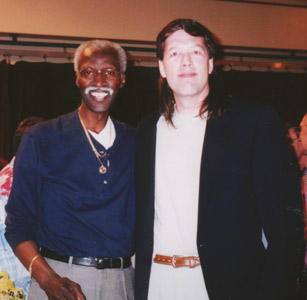 When you say"Over The Mountain, Across The Sea",you have to think of Johnnie And Joe. Pictured to the left of me is Joe Rivers,1/2 of the famous duo. Now here's a guy that can almost look me straight in the eyes! Joe Rivers was originally from Charleston, SC and Johnnie Louise Richardson was from the Bronx New York, and was the daughter of famed Record owner/producer, Zell Sanders. On a chance get together in the studio, Johnnie And Joe were paired together, and they knew they had something magical. Johnnie and Joe had the one huge hit on the Billboard pop and R+B charts called "Over The Mountain, Across The Sea", and also scored on the R+B charts with "I'll Be Spinning and "My Baby's Gone On On', which was the flip side of "Over The Mountain,Across The Sea."Rex Garvin wrote the hit along with many other songs, and he was part of the local group called the Hearts. Johnnie and Joe recorded a bunch of records between 1957 and 1964. They continued to record sporadically even into the 80's on the Ambient Sound label. If you can hear Joe today with his new partner, you would think the clock turned back to 1957. They sound fantastic. 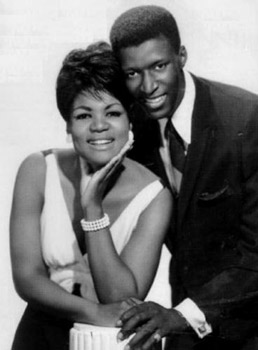 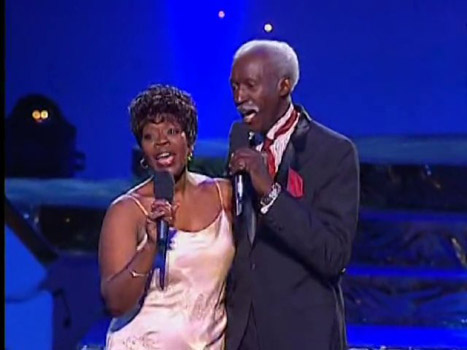 This is the first record issues by Johnnie And Joe. Though the Rockin "Feel Alright" was thought to be the side, DJ's preferred "I'll Be Spinning."The side took off and Zell Sanders tiny J+S records was offered a deal by Leonard Chess of Chess records. They would distribute the record, and eventually press the records, too. It was very expensive for a small record company to front the costs of pressing records, and led to bankruptcy for some. Originally released in November of 1956.

As mentioned, Chess distributed the record and then actually pressed them on their own label. Rex Garvin wrote "I'll Be Spinning", while label owner Zell Sanders got credit for the flip. Garvin's name will come up several times on this discography. Besides writing, he was part of the Hearts, an all female group with the exception of him, and he had his own group in the early 1960's.

The Chess 45 RPM issue of Johnnie And Joe's first record and first hit. The disc peaked at number 10 on the R+B charts. It did not appear on the Billboard charts.

Not only was "Over The Mountain,Cross The Sea" a huge hit for Johnnie And Joe, it became an absolute classic 1950'a record. It Peaked at number eight, staying twenty two weeks on Billboard, and then briefly showed up again in 1960, peaking at number eighty nine. Similar results on the R+B charts, peaking at number three, staying for sixteen weeks. Both sides written by Rex Garvin, now showing with "his" orchestra. Though not exactly the case, it looked good on the label. Shown above is a true first pressing. It's a promo showing 1664 on the label. Issued in 1957.

Chess got involved early on with this monster. The 78 shown above made a couple of corrections. On the "A" side label, it is now Across The Sea, and on the "B" side they corrected it to say Baby's. The flip actually made a brief appearance on the R+B charts.

The 45 RPM disc. DJ's really jumped on this one. Hal Jackson in New York played it a lot. It was number one in Detroit, and a territorial tip for many cities including Los Angeles in May of 1957.

This is the second pressing of the record, with the Chess logo vertical on the left side. Chess made this label change several months after the original Chess issue with the logo on top, for the Johnnie And Joe Record. This copy shows the added (Espanol) under the title on the flip.

And the third pressing, often referred to as the multi color label. There were a few variations of this label.

This is actually a second pressing of the J+S single of "Over The Mountain." It was issued in 1962, and this time with the same number as the Chess issue (1654). Both titles now also appear correctly on the labels.

Release number three was a pair of recordings written by Zell Sanders. "It Was There" backed with "There Goes My Heart" was another great two sider for Johnnie And Joe. With this release, Sanders decided not to get Chess involved, and though a great record, it did not sell well without Chess's clout and distribution network. Issued in 1957.

The 45 RPM version of the record is shown above. Besides going out on her own, Sanders has publishing on these sides shown as "Zells Music." The flip writing credits are Rex Garvin, in spite of the fact they show "Harvin"

"I Was So Lonely" backed with "If You Tell Me You're Mine" was the next Johnnie And Joe record. It came out first on the J+S label, then on , you guessed it, Chess. The 78's is shown above and was somewhat limited in production, as was the J+S label disc. Rex Garvin is back on the "A" side as the writer. Issued in 1957.

The 45 RPM record. Zell Sanders record is on the Chess label and being distributed by them, and, Zell has her publishing. Issued in 1957.

"Trust In Me" and "Who Do You Love?" were leased to George Goldner's Gone label, again, they were for national distribution capabilities.

The second of two records for 1958, "Why Did She Go" and "Why Oh Why" was issued only on Chess. Zell Sanders has it figured out. Write the songs, have a publishing company and use the big guns to help your record along.

The third 1958 release "Darling" backed with "My Baby's Gone." I like both sides of this one.

A little later pressing of "Darling" and "My Baby's Gone." This is also a different multi color label than the third press of "Over The Mountain"

And we are back to the J+S label. Exclusively on J+S, the last of four records by Johnnie And Joe in 1958. "Warm Soft And Lovely" backed with "False Love Has Got To Go." Rex Garvin wrote both sides of this one.

Here is an interesting variation. It is now "Johnni And Joe"! This is the only record for the duo in 1959. "Red Sails In The Sunset" and "Where Did She Go." This one was helped along with a distribution deal with Jubilee, but it did not make much noise.

From 1960, Johnnie and Joe appeared on the ABC Paramount label. "I Adore You" and "I Want You Here Beside Me." The promotional label is shown.

This is the stock copy from ABC Paramount. This is the first of two on ABC. The sound is a bit on the pop side.

The stock copy is shown. Production credit goes to Sid Feller, a stalwart at ABC.

"You're In Love With Someone Else" and "You're Just Right For The Part" was a J+S issue only. Notice that the due is billed as Johnnie Richardson And Joe Rivers.

Because Chess re-issued "Over The Mountain Across The Sea" in later 1960, it prompted a similarly titled answer record called "Across The Sea." It had a great feel to it, but failed to make charts or bring in coin. "You Said It And Don't Forget It" is on the flip. This was pressed in November of 1960.

From 1963, this is one of two discs recorded for the Omega label. The promo is shown for "Speak Softly (Angel) and "We Get That Feelin." This is the Omega label out of New York, an the only other release I know of so far is by Nicky Zann. There was also an Omega from Miami, FL and probably others.

Also from 1963, This release on J+S was "The Devil Said No,Gone With Your Bad Self" backed with "You Can Always Count On Me." The J+S label has been redesigned and yet a different eddies is shown.

From the label that gave us artists like the Jaynetts, the Corsairs, the Hearts and others, Johnnie and Joe landed one release in 1964. "Here We Go Baby" and "That's The 4Way You Go" is shown, as a promotional copy.

This is the stock copy. Production credit goes to Abner Spector, and after all, she was the label owner.

The Lana label was basically a reissue label from the 1960's. It would include alternate takes of hit records. That is the case here on the "A" side, but I don't have "Shortening Bread" on any other disc. Yet.

Bump up to 1968, and you have "You'r The Loveliest Song I Ever Heard" and "Let Your Mind Do The Walking" The now long time associate Rex Garvin has writing credits on both sides of the record.

From 1970, "False Love Has Got To Go" makes another appearance and is different than the 1958 recording, and the flip, which is new, Jamaica Our Thing." It sounds just like you might imagine.

Also from 1970, This is Johnnie Richardson with a solo effort. She switched over to Zells and cut "Let Sleeping Dogs Lie." The flip was a solo on the classic "Over The Mountain Across The Sea", without Joe Rivers. Zells was distributed by J+S.

From 1982, Johnnie and Joe got back together and issued an album for the Ambient Sound label. Their single had the same song on both sides if you got the promotional issue. That without question assured "Kingdom Of Love" is the side that was pushed to whoever would be playing it.

The stock copy included "Tossin Turnin (Yearnin Burnin For Your Love)" on the flip. 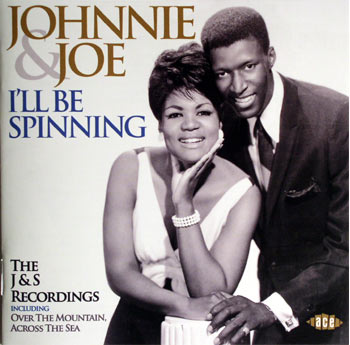 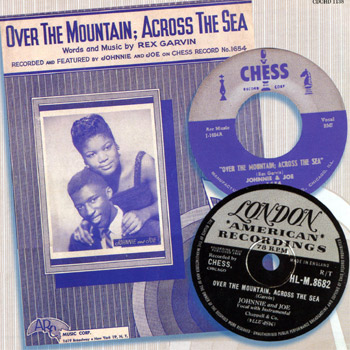