Colorradio.com - The Marathons
Must Have Javascript on
For The Slideshow To Work 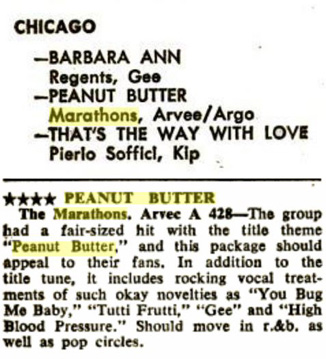 To understand the Marathons and their 1961 hit record of "Peanut Butter, you have to go backwards. When you do, generally you start with the Jayhawks. The original group consisted of James Johnson (first tenor), Cleo White (first and second tenor), Carl Fisher (second tenor), Rene Beard (baritone), and Carver Bunkum (bass). That lineup would changed several times, typical of most vocal groups. Their first release for Flash records of Los Angeles, "Counting My Teardrops" failed, but their second issue, "Stranded In The Jungle" was a smash hit. Another record for Flash, and they were off doing other things. Like being the backup group on Earl Palmer's moderate selling version of "Johnny's House Party" on Aladdin, where they also recorded "Everyone Should Know" which was not a hit. From there, they recorded as the Vibes, Cleechays - backing Sonny Knight, and several others including some on the Eastman label. In 1960, they changed their name again, this time to the Vibrations, and despite a slow start, their 1961 recording of Watusi, catapulted them into the upper eschelons of the pop and R+B charts. From this point, the waters get murky. Producers/songwriters HB Barnum and Martin Cooper wrote a song called "Peanut Butter" that was intended for the Olympics. Listening to the record, it uses the same melody as the Olympics "Hully Gully." The story goes that the Olympics where on a US tour and were unavailable to cut the record. HB Barnum gave it to the Vibrations to record a demo for him. Somehow, it made it's way to the Arvee label, and they released it. They must have conspired to be sure the Vibrations name was not used, and they selected the name of the Marathons. When Chess found out their hot new vocal group was on Arvee as the Marathons, things really got ugly. Lawsuits ensued. Chess issued it on Argo using small font letters identifying the group with the Vibrations. Meanwhile, the platter was selling briskly on Arvee, reaching number twenty on Billboard and number twenty five R+B. Though it is thought the songs were re-recorded for Chess/Argo, but I hear the same take. I'm not sure exactly how that happened. I do know that the Chess/Argo discs fell flat. 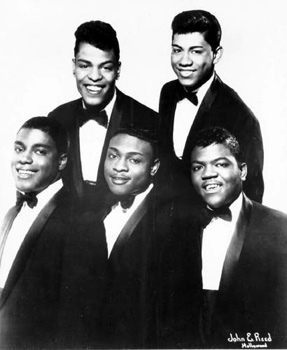 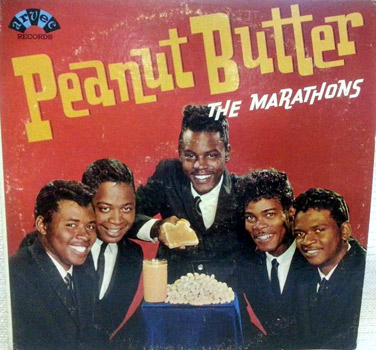 The Peanut Butter story begins with the first record label. The Marathons label shows only the titles of the song on the orange and black label. The disc started getting airplay in late March of 1961 on KFXM in San Bernadino CA, From there, it exploded. This was the Vibrations with Carl Fisher on lead vocals on both sides. "Talkin Trash" was the flip. The song peaked at number twenty on the Billboard charts, lasting twelve weeks total.

Sales were so good, that an LP was cut. Actually, there were two LP's, but the one from the Olympics was advertised on the Arvee record label. It was the "Dance By The Light Of The Moon" LP on Arvee (424), which included just the song Peanut Butter by the Marathons/Vibrations. Thus the advertising of the LP on the "Peanut Butter" label, is a second press. The other LP that was issued was simply called "Peanut Butter" by the Marathons, also on the Arvee label (428).

Once the Vibrations cover was blown, the record was issued on Argo, a Chess subsidiary. They issued "Peanut Butter" with a new side, "Down In New Orleans." The promotional copy is shown, and the additional verbiage "Vibrations Recorded As (Marathons)", was added. To my ears, this does NOT sound like a re-recorded version. Issued in April 1961.

The first issues of the stock copy had the same verbiage listed above, "Vibrations Recorded As (Marathons)." The record is shown for historical purpose, and to trace the progression of releases.

On slightly later pressings they switched the verbiage to read "Vibrations Named by Others As (Marathons)." There was likely no promo sent out for this change, and they were trying to hide it anyway based on the tiny print size, lawsuits, and general embarrasment and frustration.

Generally, Argo stopped pressing black label 45's after record number 5360. However, certain pressing plants would occasionally use black paper in their process. This continues with the "Vibrations Named by Others As (Marathons)" theme used on the last label variation."

Chess, the parent company of Argo, issued the sides in May of 1961. They continued the use of "Vibrations Named by Others As (Marathons)." This is also available on the Chess blue label.

Naturally, a follow-up needed to be recorded. This time, it was "Tight Sweater" backed with "C. Percy Mercy Of Scotland Yard." And, naturally, they didn't use the Vibrations, as they had already been down that painful road. This group consisted of Bobby Mac, James Hall, Freddy Sachel, and Art Wheeler. This group was on the other Marathons disc, they are also the group on Plaza, but not the JC or Sabrina label Marathons.

A pink label variation was pressed with this second 45 RPM release. The record was not succesful, but "Tight Sweater" did gets spins on KFXM in San Bernadino CA, and WSPR in Springfield Massachusetts.